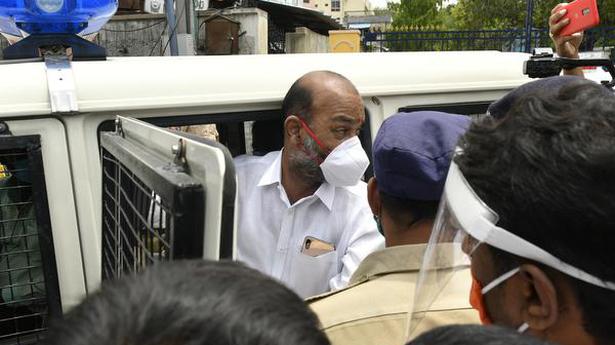 Leaders of BJP State unit, including party president Bandi Sanjay, were arrested at various places across the twin cities on Monday when they tried to stage a demonstration against the alleged failure of the government in tackling COVID-19 spread.

While Mr. Sanjay and other leaders were picked up from the BJP State office in Nampally, others like K. Laxman and N. Ramchander Rao were not allowed to come out of their respective houses for any kind of protest.

The party’s main demand is to include COVID-19 treatment in Aarogyasri or in the Centre’s Ayushman Bharat insurance scheme. It also wants the government to provide free treatment to all citizens irrespective of the hospital they are admitted in, and to increase the testing capacity multi-fold.

“This government has utterly failed in containment of coronavirus and has disregarded Indian Council of Medical Research guidelines for testing and tracing. Where are the hundreds of isolation beds [that were to be] made ready? Where are the personal protection kits and masks? Not a single hospital has been made ready to receive the rising number of cases and the facilities in government hospitals are insufficent,” Mr. Sanjay charged.

Instead of taking objection to the criticism levelled by national party president J.P. Nadda, the TRS government should introspect why so many healthcare workers, police and even journalists are falling prey to the novel coronavirus and why the government is obfuscating figures in medical bulletin being released daily by the Health department.

The BJP State president urged the government to immediately open the Telangana Institute of Medical Services at Gachibowli and start admitting patients. The admission process should also be streamlined given that the deaths in the State has reached an alarming 3%.

Mr. Sanjay reiterated that the Central government had provided crores of rupees to Telangana for combating COVID-19 and accused the government of misuse of funds and hence, wanted a white paper to be released on the extent of funds spent. “If everything is hunky dory as the Health Minister claims, why are doctors at Gandhi Hospital doctors and now at Osmania General Hospital protesting,” he questioned.

Chief Minister K. Chandrasekhar Rao should call for an all-party meeting and explain the current COVID-19 situation, he demanded.

Congress to represent to Centre