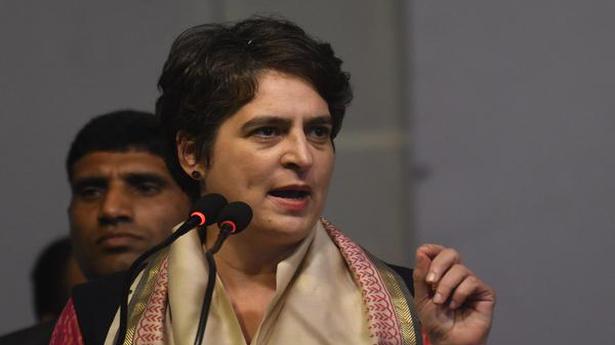 Congress general secretary Priyanka Gandhi Vadra on Thursday accused the Bharatiya Janata Party (BJP) of trying to “destabilise” the Maharashtra government instead of extending full support to the State that was grappling with the COVID-19 pandemic.

Also read: Analysis: Conditions that led to formation of government in Maharashtra are intact though BJP, it appears, is happy to fish in troubled waters

Addressing an online press conference on Tuesday, Mr. Gandhi seemed to have distanced his party – a coalition partner in the Maharashtra Vikas Aghadi government — from the State’s high number of COVID-19 cases by stating that his party was not a key decision-maker in the State.

“Look at the Maharashtra government where the epidemic has assumed a frightening form and the State government is battling with it. Instead of helping it, you are trying to bring it down and destabilise it, Ms. Vadra said in a six-minute-long video message that was part of the Congress’ Speak Up India campaign on social media platforms.

Ms. Vadra urged political parties, especially the BJP, to shun politics and recalled the face off with the Yogi Adityanath government in Uttar Pradesh over deploying buses to ferry migrant workers to their home State.

“In U.P., you rejected our offer to provide 1,000 buses even though we had clearly told you that you can put your own banners and posters to run them. Then you claimed that 12,000 buses would be used to ferry migrants but those buses are plying on paper,” she said.

In an emotional speech, Ms. Vadra urged the government to focus on the plight of the migrants and referred to some of the painful examples of hardship like “a toddler trying to wake up his dead mother on a railway platform in Bihar or a daughter who cycled hundreds of kilometres carrying her sick father or a young son ferrying his parents in a bullock cart”.

“We are always indebted to our people. In your victory, they cheered you and in our moment of defeat, they stood by us….Bharat Mata is crying today but you are silent, not coming forward to help,” Ms. Vadra said in an emotional appeal but didn’t name any leader.

As part of the Speak Up India campaign, the Congress is urging the Centre to offer a monthly cash assistance of ₹7,500 to needy families, double the number of work days under the Mahatma Gandhi National Rural Employment Guarantee Act (MNREGA) and help small businesses. The Congress claimed that the social media campaign trended as number one worldwide and got 10 crore impressions.