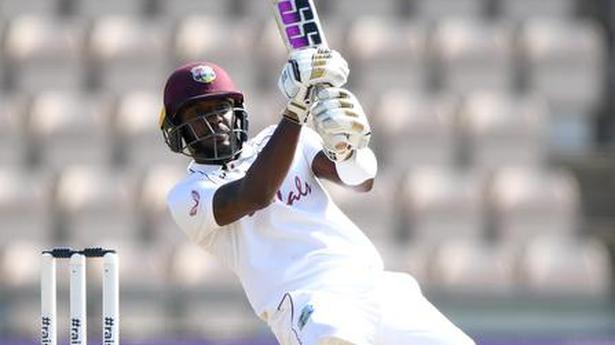 Jermaine Blackwood’s fighting 95 in the second innings helped West Indies seal a four-wicket win over England on a gripping final day of the first Test at the Ageas Bowl on Sunday.

West Indies took a 1-0 lead in the three-match series, with the second and third Tests to be held in Manchester without fans in the stadium due to the COVID-19 pandemic.

When the pursuit began, Barbados-born paceman Jofra Archer dismissed Kraigg Brathwaite for four with a moving ball that the opener edged onto the stumps and trapped Shamarh Brooks in front with a beauty.

After Mark Wood bowled Shai Hope for nine to leave West Indies in trouble at 27 for three,

Chase and Blackwood set about repairing the damage.

Archer, who tormented the batsmen with his pace and bounce, had Chase caught behind with a fine delivery, but Dowrich provided solid support as the West Indies edged towards its target.

Earlier, England was bowled out for 313 in its second innings after resuming on 284 for eight, with the overnight pair of Archer and Wood failing to offer much resistance.

Wood edged paceman Shannon Gabriel to wicketkeeper Dowrich and Archer became Gabriel’s fifth victim of the innings as he edged a short-pitched ball to the ’keeper on 23.

Gabriel finished with figures of five for 75 — his sixth five-wicket haul in Tests — while Chase and Alzarri Joseph picked up two wickets apiece.