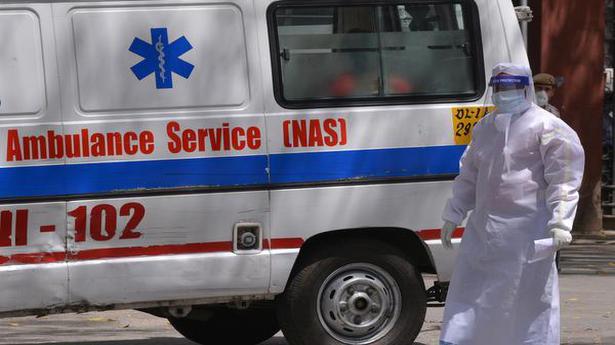 The ambulance stopped at the GTB Hospital and Sarwar Ali sprang out and ran into the building, hoping to quickly get his unconscious wife admitted — the oxygen cylinder in the vehicle was running dangerously low and there was not a minute to waste.

It had to be third time lucky if Miskeen Begum had to survive. After being refused admission in two hospitals, her life hinged on getting that bed in GTB Hospital. And if not, enough oxygen in ambulance to see her through to another hospital for another try at getting admitted.

Three hospitals, several kilometres, many hours and just one cylinder. That was what it had come down to for a despairing Ali as he fought to save his wife.

Suffering from chronic kidney disease and diabetes, Miskeen Begum had lost consciousness in the morning and her 57-year-old husband had run the rounds of hospitals. From their home in Khajuri Khas in northeast Delhi to the Jag Pravesh Hospital, which turned them away, then to the Institute of Human Behaviour and Allied Sciences (IHBAS), which also said no, and finally to the Delhi government-run GTB Hospital.

She cannot be transported without any oxygen mask, Ali, a weaver by profession, said, as he rushed through the paperwork on Thursday.

Miskeen Begum finally got admission and Ali heaved a sigh of relief.

But it was touch and go.

As increasing number of stories emerge of patients being sent from one hospital to another in search of a vacant bed, accessing an ambulance equipped with enough oxygen to see the patients through the traumatic journey is rapidly turning into a huge challenge.

Besides, 154 ambulances have also been converted to dedicated COVID-19 ambulances so the resources are divided between those suffering from the coronavirus infection and those with other diseases.

Private hospitals and several other institutes have their own ambulances.

However, while ALS and BLS ambulances have two oxygen cylinders, the PTAs are fitted with only one cylinder since the vehicles are small and there is not enough space.

Due to coronavirus, patients have to be taken to different hospitals. Admission of the patient takes a lot of time, sometimes even four hours. So, a lot of time goes in transit, said Sanjay Tyagi, CATS programme officer.

The fact that the vehicles need to be sanitised is another issue.

Those operating COVID-19 ambulances have been given PPEs. Plus, the vehicle is either sanitised or fumigated after each trip, Tyagi said. The next call is only assigned after a break of 45 minutes.

He denied that there was a shortage of oxygen cylinders. Since a lot of time goes in transit these days, there could be a case that ambulances may not have been able to replenish the stock as our cylinders are kept at one central location.

It’s not always about a coronavirus patient but other health needs too.

Also at GTB Hospital was 55-year-old Ashok Chauhan, who works for Uttar Pradesh’s Provincial Armed Constabulary and was brought from Meerut.

He was suffering from typhoid and was also breathless. When doctors at GTB said it is a designated COVID facility and they can’t take him in, his family was faced with a fresh crisis — hunt for another hospital and an ambulance with a functional oxygen cylinder.

The family arranged an ambulance, but the doctor warned them not to transport him in an ambulance without an oxygen cylinder.

Chauhan’s two sons scrambled to arrange for one, rushing to each ambulance that drew up with patients at the hospital. They stopped the drivers to ask if their vehicles were equipped with oxygen and were free to transport their father.

“Even an enemy should not go through the trouble we are facing,” Chauhan’s wife said, breaking into tears.

After much running around, Chauhan’s son Birender managed an ambulance with a functional oxygen cylinder.

The situation was not too different at the Rajiv Gandhi Super Speciality Hospital, another dedicated COVID-facility, in Dilshad Garden.

Ashish Jain had brought his father Subhash who was suffering with pneumonia for a week. But doctors told him he was a suspected COVID-19 patient but had not yet tested positive and they could therefore not treat him.

The super speciality hospital, they said, is meant for coronavirus positive patients.

But Jain’s father could only be shifted to another hospital in an ambulance with a proper oxygen cylinder as he had respiratory issues.

“There was an ambulance available, but it was only meant for COVID-patients. Since he is not a confirmed case of coronavirus, another ambulance is needed, but one with a proper oxygen cylinder,” Jain said as he scrambled to arrange for an ambulance.

All for an ambulance with a properly functioning oxygen cylinder. As hapless families grapple with their ailing patients, endless bureaucracy and figure out which hospital they should go to, COVID-19 or not, that really has emerged as a big issue.