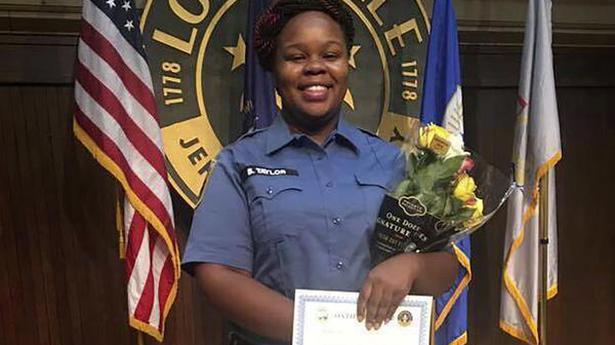 Benjamin Crump, a civil rights lawyer representing the Taylor family, said it was “outrageous” that none of the officers would be criminally charged with causing Taylor’s death.

Two white policemen who fired into the apartment of Breonna Taylor, a Black medical worker, will not be prosecuted for her death because their use of force was justified, and a third was charged with endangering her neighbors, Kentucky’s attorney general said on Wednesday.

Attorney General Daniel Cameron announced the Louisville grand jury’s decision at a news conference, as protesters against racial injustice and police brutality massed in the streets of Kentucky’s largest city.

Protests were largely peaceful. But about a dozen people were arrested in one confrontation between hundreds of demonstrators and dozens of heavily armed law enforcement officers in riot gear just outside downtown Louisville.

Former Detective Brett Hankison was indicted on three counts of wanton endangerment in the first degree, an offense that ranks at the lowest level of felony crime in Kentucky and carries a maximum sentence of up to five years in prison.

Benjamin Crump, a civil rights lawyer representing the Taylor family, said it was “outrageous” that none of the officers would be criminally charged with causing Taylor’s death.

Taylor, 26, was killed in front of her armed boyfriend shortly past midnight on March 13 inside her Louisville apartment after Hankison and his two colleagues forced their way in with a search warrant.

The two other officers, Sergeant Jonathan Mattingly and Detective Myles Cosgrove, were not charged because they were justified under Kentucky law in returning fire after Taylor’s boyfriend, Kenneth Walker, shot at them, wounding Mattingly in the thigh, Cameron said.

“There is no doubt that this is a gut-wrenching, emotional case,” Cameron, a Black Republican, said at a news conference.

Governor Andy Beshear called on Cameron to release all evidence in the case so that the public could better understand the outcome of the investigation.

“Everyone can and should be informed,” Beshear said. “Those feeling frustration, hurt – they deserve to know more.”

Hankison fired his weapon 10 times. Some of the bullets traveled through Taylor’s apartment into adjacent Apartment No. 3, where a man, a pregnant woman and a child were at home.

There was “no conclusive” evidence that any of Hankison’s bullets struck Taylor, Cameron said. The grand jury indicted him for wantonly placing the neighbors in danger, Cameron said.

Hundreds of demonstrators wound their way out of downtown Louisville’s Jefferson Square Park and marched through the streets chanting, “Out of the homes, into the streets!”

In a suburban area at the edge of downtown, protesters threw water bottles at police, who responded by firing pepper balls into the crowd. Pushing and shoving ensued between the two sides, and some demonstrators broke windows of businesses in the area.

Ahead of the announcement, Louisville Mayor Greg Fischer announced a 72-hour curfew for the city beginning at 9 p.m. ”I urge everybody to choose peaceful and lawful protest,” Fischer said. At a news conference later, he said the U.S. Justice Department was continuing to investigate whether any federal laws were broken, including potential civil rights violations.

“It’s clear that there are policies and procedures that needed to be changed, because Breonna Taylor should still be alive,” he said. “Let’s turn to each other, not on each other, at this moment of opportunity.”

Despite having a warrant that allowed them to enter the premises unannounced, the three officers involved knocked on Taylor’s apartment door and announced their presence outside, which was corroborated by a neighbor, Cameron said. Getting no answer, they “breached the door,” he said.

Mattingly entered first, and at the end of a corridor saw Taylor and her boyfriend, Kenneth Walker, with Walker pointing a gun. Walker fired, injuring Mattingly in the thigh. Mattingly returned fire, and his colleagues began shooting soon after, Cameron said.

In June, the Louisville Metro Police Department fired Hankison with interim Police Chief Robert Schroeder writing that Hankison “displayed an extreme indifference to the value of human life” when he “wantonly and blindly fired” into Taylor’s home.

The department reassigned Mattingly and Cosgrove to administrative duties. Local news media reported that Hankison turned himself into authorities on Wednesday at an area detention center, and was released on $15,000 bond.

In obtaining a warrant as part of an investigation of a drug ring, police told a judge they believed that one of the men suspected of selling drugs had used Taylor’s apartment to receive packages.

Taylor had previously dated a suspected drug seller but had severed ties with him, according to her family.

She and Walker were in bed when police broke down her door with a battering ram shortly after midnight, the families’ representatives have said.

Louisville has agreed to pay $12 million to Taylor’s family to settle a wrongful-death lawsuit, Mayor Fischer announced earlier this month. He said Wednesday the settlement was intended to “begin the healing process.”