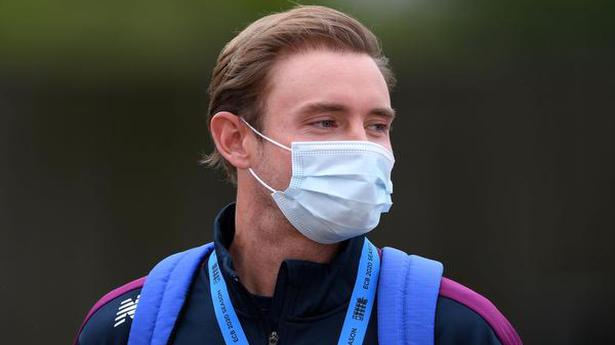 England paceman Stuart Broad said he felt frustrated and angry at having “my shirt” taken away after he was dropped for the first Test against the West Indies at Southampton.

Broad was in England’s 13-man squad for the series opener, the first major international cricket since the coronavirus lockdown.

The paceman is second only to long-standing new-ball colleague James Anderson in England’s all-time list of leading Test wicket-takers.

He was their most successful bowler during a 3-1 series win in South Africa earlier this year, with 14 wickets at under 20 apiece.

But for the first match of the ongoing three-Test series, England opted for the express pace of Jofra Archer and Mark Wood, as well as Anderson and stand-in captain Ben Stokes in their four-man seam attack.

Broad made no attempt to hide his hurt during a frank interview with Sky Sports before Friday’s third day, with West Indies resuming on 57-1 in reply to England’s 204 all out.

“I found out about 6 p.m. the night before the game,” said Broad. “Stokesy told me we were just going with extra pace in these conditions.

The 34-year-old Broad said he had spoken to England national selector Ed Smith about the prospect of adding to his tally of 485 wickets from 138 Tests.

And with England set to play six Tests in seven weeks, with a three-match series against Pakistan to follow the Windies campaign, it is likely Broad will be involved.

“I wanted clarification about my future going forward and I was given pretty positive feedback,” he said.

“I’m not a particularly emotional person but I’ve found the last couple of days quite tough. To say I was disappointed would be an understatement…. I’m frustrated, angry, gutted.

“It’s difficult to understand. I’ve probably bowled the best I’ve ever bowled the last couple of years — I felt it was my shirt.”

Broad, however, said he did have some sympathy for the selectors’ dilemma.

“We are also in a fairly unique position this summer,” he said. “Very rarely do you get all your bowlers fit like we’ve got at this minute.

“Part of my strength and durability as a cricketer is that I’ve been fit on a lot of occasions and been available for selection.

“I felt like I deserved a spot in the team, as would anyone else.”

But the Nottinghamshire paceman, looking ahead to the second Test, added: “Now I’ll be doing as much as I can in the next week so make sure I’m available for Old Trafford.”