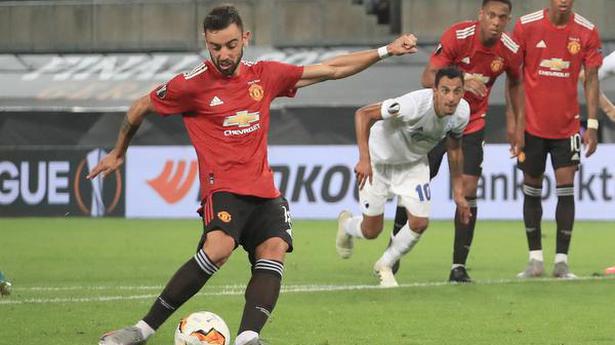 Copenhagen dominated the opening half and missed several chances before United moved up a gear in the second, hitting the woodwork twice and forcing a string of superb saves from keeper Karl-Johan Johnsson.

Fernandes settled the contest when he drilled his spot-kick past Johnsson after Anthony Martial was fouled by Andreas Bjelland. Copenhagen came forward in search of an equaliser but United’s defence, which looked shaky all evening, held out.

In the another quarterfinal at Dusseldorf, Inter Milan’s Romelu Lukaku scored and tormented the Bayer Leverkusen defence as he led his side to a 2-1 win.

Nicolo Barella put Inter ahead after 15 minutes, driving the ball home after Lukaku’s shot was blocked, and six minutes later the Belgian displayed his strength by holding off defender Edmond Tapsoba before firing home. Leverkusen’s Kai Havertz pulled a goal back for the Germans.

Lukaku placed the ball on the penalty spot once in each half only for the Video Assistant Referee (VAR) to overturn both decisions.