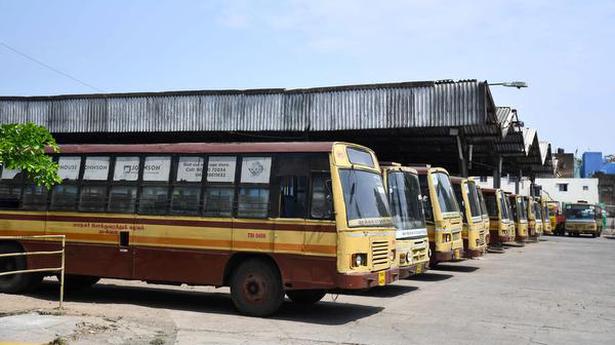 The State government appears disinclined to go for the early resumption of bus transport services. As of now, they remain suspended till August 31.

The services, that were allowed in a limited way for three weeks in June after the imposition of the first phase of lockdown on March 25, have remained suspended since June 24, after the rise in COVID-19 cases.

Even in June, bus services in Chennai and its neighbouring districts of Kancheepuram, Tiruvallur and Chengalpattu were not permitted. In the remaining districts, 50% of the fleet of transport corporations was allowed in six zones, with 60% seat occupancy.

In terms of public health, even though the situation seems to have improved in Chennai, that isn’t the case in several other districts. A perusal of the medical bulletin for Tuesday reveals that about 34% of fresh cases is from 10 districts other than Chennai and its three neighbours. Those 10 districts include Coimbatore, Cuddalore, Theni, Salem and Ranipet.

Needless to say, the resumption of bus services will only add to the situation of surge in cases. It is for these reasons that the top brass in the government does not want to take chances. “Chief Minister [Edappadi K. Palaniswami] wants to approach the matter in a cautious manner,” a senior official pointed out.

Another official said there would not be any change in the situation till the end of the month. He added that keeping the diesel-run buses idle did not pose any issue, as maintenance of battery was important and this was being done by removing and charging them. As per an estimate, if the services resume, the corporations will lose ₹8 per km.