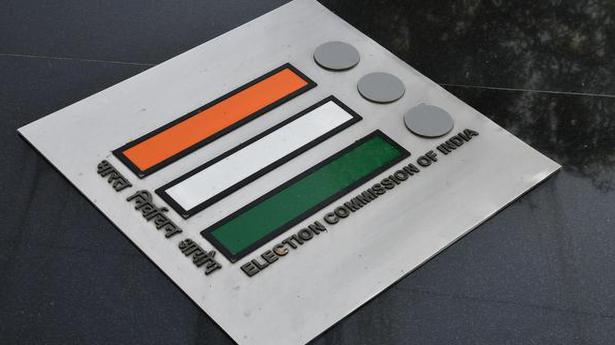 This includes 28 seats in Madhya Pradesh, which were vacated by Congress MLAs when they quit to join the BJP earlier this year.

By-elections to 56 Assembly constituencies and one Lok Sabha seat in Bihar that have been pending due to the COVID-19 pandemic would be held on November 3 and November 7, the Election Commission of India (ECI) announced on Tuesday.

The ECI, however, did not announce the schedule for bypolls to seven seats in Assam, West Bengal, Tamil Nadu and Kerala that are also vacant, as the authorities in these States expressed difficulties in conducting polls, a Commission statement said.

Polling for the Valmiki Nagar parliamentary constituency would be held on November 7, along with two Assembly seats in Manipur. Polling for the 54 Assembly seats – one each in Chhattisgarh, Haryana and Telangana, two each in Jharkhand, Karnataka, Nagaland and Odisha, seven in Uttar Pradesh, eight in Gujarat and 28 in Madhya Pradesh – would be held on November 3. Counting of votes for all the by-elections would be on November 10. The constituencies in Madhya Pradesh include the seats vacated by Congress MLAs when they quit to join the BJP earlier this year.

The ECI said it had decided the poll schedule after taking into account various factors, including local festivals, movement of security forces, as well the pandemic.

The ECI’s guidelines for elections during the pandemic would be applicable to the bypolls as well. Masks would be mandatory for all those involved in poll-related activities, from the poll workers to candidates to voters.

For the remaining vacant constituencies – Rangapara and Sibsagar in Assam, Kuttanad and Chavara in Kerala, Tiruvottiyur and Gudiyattam in Tamil Nadu and Falakata in West Bengal – the ECI said it had decided not to announce by-elections “at this stage”. It added that it would take a call on other recent vacancies in Assembly and Parliamentary constituencies after receiving inputs from the States concerned.

Last week, the ECI announced elections to the Bihar Assembly in three phases- on October 28, November 3 and November 7 and counting on November 10.