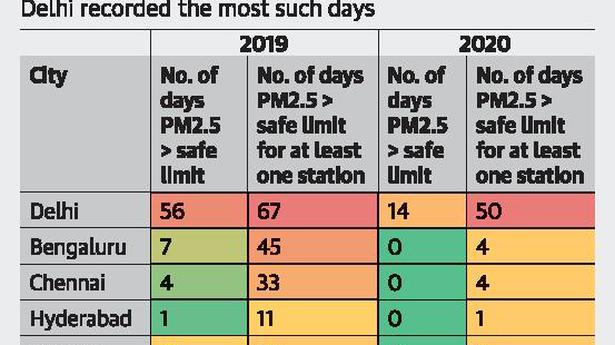 Barring Delhi, daily average PM2.5 of none of the other cities exceeded safe limit

Throughout the COVID-19 lockdown — though air pollution in Delhi was less compared to 2019 — the air quality of the city was still worst among six large cities in different parameters, according to an analysis by the Centre for Science and Environment (CSE), accessed by The Hindu.

Among the six “mega cities” — Delhi, Mumbai, Kolkata, Hyderabad, Chennai, Bangalore — other cities had better air quality than Delhi, in terms of PM2.5 levels, as per the analysis. Local meteorological events have also influenced the air quality of different cities.

Except Delhi, the daily average PM2.5 (particulate matter) levels of none of the other five cities exceeded the safe value (60 micrograms per cubic metre) during the lockdown from March 25 to May 31, according to the study. But Delhi exceeded the safe limit after 14 days.

PM2.5 is fine inhalable particles, which can get deep into the lungs and even into the bloodstream and cause respiratory diseases.

Also, among the cleanest days of these cities in the same period, Delhi had the highest value of PM2.5 and Kolkata had the lowest. A higher value of PM2.5 means more pollution.

“Among mega cities, Delhi is the worst performer. But if you include tier-1 cities also, then Lucknow and Patna are worse than Delhi,” said Avikal Somvanshi, a programme manager at CSE, who co-authored the analysis with Anumita Roychowdhury, executive director of CSE.

Also, on 50 days, at least one station in the city exceeded the PM2.5 daily standard value, whereas Mumbai had no such days and Hyderabad has only one such day.

Last year, the same value for Delhi was 67 and has seen about 25% reduction this year. But other cities recorded much higher reductions. “Bengaluru, Chennai, Hyderabad, and Kolkata had 91%, 88%, 91%, and 76% lesser number of days respectively, with at least one city station exceeding the daily standard,” the analysis said.

The researchers also compared average PM2.5 value for 54 days from March 25 to May 17, when the lockdown was stricter, to a rolling average of 54 days in 2019 and found that for Chennai and Kolkata, this year’s value was lesser than last year’s average of cleanest 54 days.

The cleanest period is usually during monsoon and this essentially means that the PM2.5 levels of Chennai and Kolkata were better during the lockdown than last year’s monsoon, according to Mr. Somvanshi.

In Bangalore and Delhi, the average air quality during 54 days of lockdown was only 20% worse than last year’s monsoon.