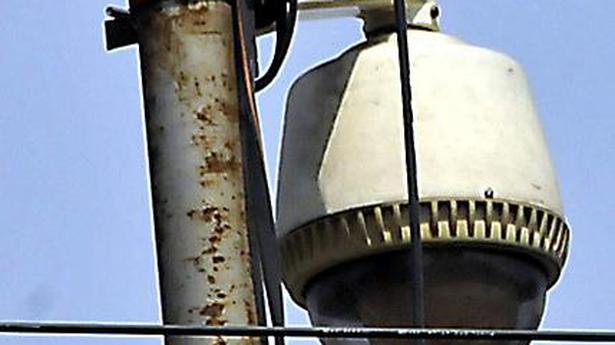 Scores of CCTV cameras in the limits of at least three police stations are defunct, a Right to Information (RTI) query has revealed.

RTI activist S.Q. Masood had sought information from the office of Director General of Police M. Mahender Reddy about the number of CCTV cameras installed across police station limits in the tri-commissionerates of Hyderabad, Cyberabad and Rachakonda, number of functioning cameras, and those that are defunct. The RTI query was then transferred to police stations.

According to responses received, Balanagar Police Station limits has 485 CCTV cameras installed in public places, out of which over half — as many as 255 — are not working.

A response from Jeedimetla Police Station revealed that of the community 708 CCTV cameras installed, 242 cameras are non-functional. “Under Nenusaitham Programme, 4,042 cameras were installed in the limits of Jeedimetla PS and they are functioning,” an excerpt from the RTI response reads.

The Madhapur Police Station has 310 community installed CCTV cameras out of which 26 are not functional. This, the police said, is due to reasons like snapping of cables, which are now being repaired. Police also said that a constable is deputed as a CCTV Admin who checks the functionality of each camera on the field.

Police stated that CCTV camera procurement and maintenance is being done by vendors empanelled by the Telangana State Technology Services Ltd, an agency of the Telangana government. These cameras are installed for public safety and detection of crimes.

“I had filed the RTI in June as part of my research work. While some responses have come from police stations late last month, not a single police station from the Hyderabad Commissionerate has sent any reply. There should be an exclusive authority constituted for this project to look into the maintenance and other issues. As you can see, the RTI responses state that several dozen cameras are not working. This too is a little alarming. Best case scenario is that a law must be passed in the legislature for accountability,” Mr. Masood said.