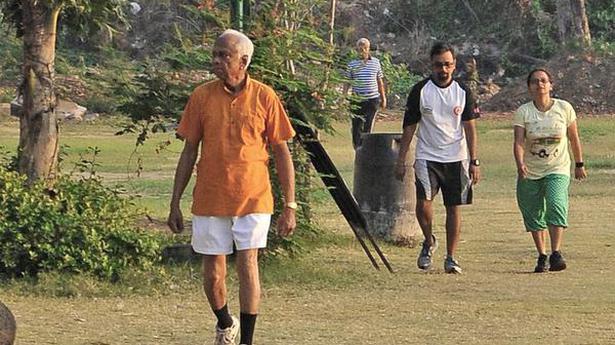 In February, V.S. Sukumar had to stay confined to his home due to a medical condition, and in March the lockdown happened, further keeping him behind locked gates.

Sukumar, who is honorary secretary of Gandhi Nagar Cricket and Sports Club (GNC&SC), has been putting the time spent indoors to good use and he is doing what he is known to do so very well — kindling people’s interest in the history of the neighbourhood — and his current attempt at documenting the neighbourhood’s history comes with a greater personal touch.

Since 2013, Sukumar and his friends have been organising the Gandhi Nagar Heritage Walk, under the aegis of Gandhi Nagar Cricket and Sports Club.

Gandhi Nagar’s history as a planned residential locality begins in 1948-49, and in the decades that immediately followed, it had 320 bungalows.

“Ours was a joint family and we had a bungalow opposite Bala Vidya Mandir School, now an apartment stands there. But we are still rooted to the area. The locality has a number of residents who have lived since its inception. I am one such resident,” says Sukumar, a chartered accountant by profession and a former league cricketer, who is instrumental in reviving the Gandhi Nagar Cricket and Sports Club.

The articles he is writing celebrates Gandhi Nagar through its eminent personalities, past and present.

The first article in the series is about late P.B. Janardhan, an accomplished academician, whose family still owns a bungalow in Gandhi Nagar. The next profile is of Sukumar’s maternal grandfather C. Ranganatha Aiyangar. After retiring as headmaster from a school in Gooty, Aiyangar moved to the area, and he along with a few other residents were instrumental in setting up Gandhi Nagar School.

“A few families that had moved here came together to start Gandhi Nagar School. In 1954, when they needed more finance they got the support of the Raja of Chettinad and the institution was renamed Rani Meyyammai School, which is where Kumararani Meena Muthiah College of Arts and Science is located,” says Sukumar.

There is an article coming up about the police officials and actors of Gandhi Nagar.

“He is a year older than I am, and I also have a group photo of him from his younger days,” says Sukumar.

Stating that he is not social media-savvy, Sukumar says he will be sharing these articles with his large circle of friends. There are 2000 walkers who are pass holders of the Gandhi Nagar Cricket and Sports Club and he would be circulating it to them as well. He’s also open to putting these articles together as a book, provided a publisher is willing to take it up.

In the past, Sukumar had written about the hockey players of Kottur and about Gandhi Nagar’s disappearing rainwater channelling structures.