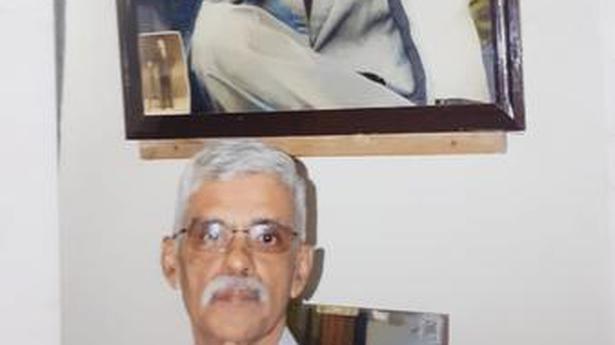 February 25, 2018: We are a group of walkers taking part in the 6th Gandhi Nagar Heritage Walk

At the bungalow with the address Old No.3, II Canal Cross Road, Mr. P.B. Athulendranath (Shenoy) received the walkers and took us around his house and showed the memorabilia belonging to the family.

Athulendranath is an alumnus of St. Patrick’s School and a retired banker. His father, late P.B. Janardhan, who has a Ph.D doctrate, bought the house from the Gandhi Nagar Co-operative House Construction Society in 1954 and paid the price on hire purchase.

He fondly named his house “Athula-Kal” after his son and daughter. Janardhan had long ago added space to the original “C” type house by engaging the services of his architect colleagues and made it look elegant by introducing a variety of features. Janardhan was fond of gardening and had a well-maintained lawn in the front with plants and trees all around the house. Athulendranath said his father would frequently visit Soundarya Nursery at Teynampet from where he bought saplings. The house has many trees including jamun, cashew, jackfruit, sapota, badam, Ceylon coconuts, ramphal, nellikkai and mango trees.

My younger brother, V.S. Ravikumar, recalled that Janardhan was always immaculately dressed in a suit, a neck-tie and a hat while driving his well-maintained two-tone (white and blue) Standard Super 10 with Registration No. MSW 249 to A.C. Tech.

The old residents knew Janardhan as a genius and a great academician. Athulendranath showed his father’s impressive biodata starting with the gold medal that he got in Science in SSLC. He went on to receive a doctorate (Ph.D.) in 1953. Janardhan joined Alagappa Chettiar College (A.C. Tech), Madras University in 1944 in the formative years as a teacher and moved up to become the Head of the Department of Analytical and Inorganic Chemistry in 1959.

After retirement, Janardhan took interest in his mother tongue Konkani. He wrote and published five books, including four in Konkani.

There are several photos that reflect Janardhan’s interest and skill in photography. He has neatly arranged them into one large photo album, which is full of 10″ X 6″ photos of attractive landmarks of Old Madras, including one of the beautiful Adyar river and the old Elphinstone Bridge, shot from Gandhi Nagar.

(Edited excerpt from an article written by V.S. Sukumar for his Gandhi Nagar people series)