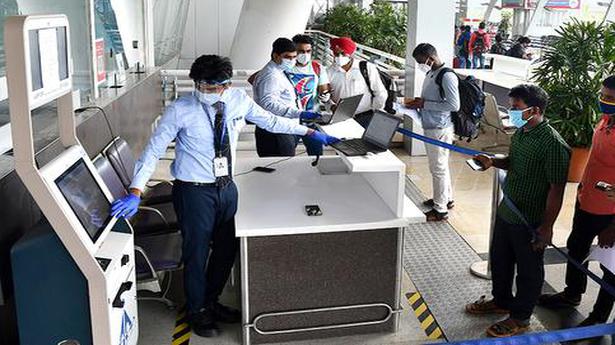 Chennai airport’s arrival hall in the domestic terminal will no longer have the e-pass counters. Henceforth, air passengers coming in from other States have to get the e-pass online from the designated portal.

On Friday evening, Chennai airport, in a tweet said: “The TN e-Pass facility at #Chennaiairport domestic arrival stands withdrawn from 1800 hrs, today. We request all interstate passengers arriving at #Chennai to apply for TN e-Pass from the link https://tnepass.tnega.org/#/ user/pass prior commencing the journey.”

Officials of the Airports Authority of India (AAI) said, every day, thousands of passengers arriving in the city from several destinations either get the e-pass online or decide to get it at these counters set up by the Tamil Nadu government in May this year when the domestic flight services resumed.

It was to help passengers who were not aware of the e-pass system or had trouble getting it. But over the last few weeks, as many relaxations were put in place by the government, the passenger traffic grew significantly. And, hundreds of passengers did not get the e-pass online and instead got it from the counters only.

“The queues were very long, with barely any physical distancing between passengers. It was a cause of concern for us. Though we had been constantly reiterating the need to obtain it online, majority of them bought the e-passes here because they were hard pressed for time or they did not know this rule was still in place in the State,” an official said.

Greater Chennai Corporation officials said they had stopped playing a role in issuance of e-pass for passengers from other States.

All passengers who arrive from other States and are asymptomatic have to be on home quarantine for a period of 14 days.