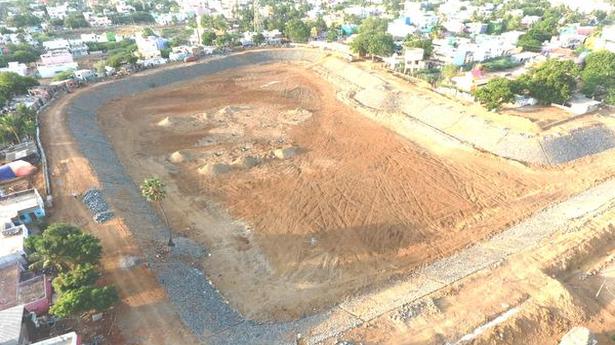 While the Greater Chennai Corporation is, on the one hand, engaged in battling COVID-19, on the other, is speeding up the various waterbody rejuvenation projects to get ready for this year’s monsoon and make up for time lost during the lockdown.

A senior official said a total of 210 waterbodies were to be restored under various projects, including the Smart Cities Mission (in three phases), and funded by different world agencies. While work on 105 waterbodies was completed, 78 were still in progress, and funding was being awaited to begin work on the remaining 27.

Environmental non-governmental organisations were allotted rejuvenation work at some waterbodies using CSR funds. All renovation projects, except the CSR ones, would be carried out at a cost of around ₹415 crore.

Corporation officials were focussing mainly on finishing projects under the Chennai Mega City Development Mission (CMCDM). The civic body directed officials to speed up the restoration work of badly-maintained waterbodies in Manali, Madhavaram, Thiru Vi Ka Nagar, Ambattur, Valasaravakkam, Alandur, Perungudi and Sholinganallur, which were merged with the city in 2011.

A senior official said 47 waterbodies had been identified to be renovated under the CMCDM at a cost of ₹110 crore by deepening ponds, strengthening bunds and paving walkers’ paths.

Work is under way at the accelerated pace at Edayanchavadi tank, Sarangapani Kulam and Harikrishnapuram pond in Manali. In Madhavaram, waterbodies of the Padavattamman koil, Ring Road Housing Sector and Swamy Nagar are being restored. Similarly, waterbodies in Ambattur, Porur, Korattur and Perungudi are also being renovated.

The civic official said work was under progress in all 47 waterbodies with over 30% of it completed. He said if it wasn’t for the lockdown all waterbodies would have been renovated by August but the revised deadline has been pushed back to to November.