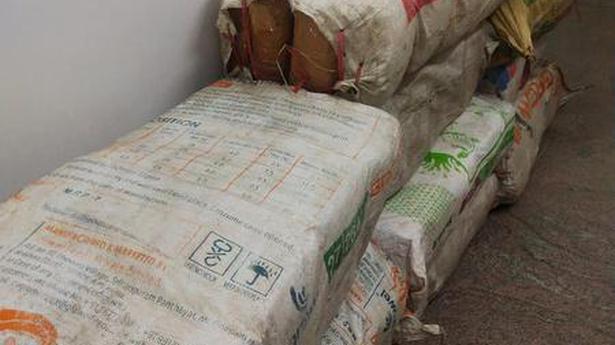 The Chennai police on Tuesday seized a huge haul of ganja, being illegally transported as an onion consignment, from Andhra Pradesh, and arrested three suspects. This is said to be a major catch of ganja by the city police during the lockdown period.

Police personnel attached to the Red Hills Police station were conducting vehicle checks at M.A. Nagar at the border of city limits, when, following information, at 1 a.m., they intercepted a goods carrier coming from Gudur, Andhra Pradesh, at the checkpoint. The men in the vehicle told the police that they were transporting onions, and gave evasive replies which raised suspicions. On searching the vehicle, the police found bundles of ganja concealed in the bags of onion. The owner of the goods carrier had followed the goods carrier in a taxi. All suspects and the goods were brought to the police station.

Additional Commissioner of Police, North, A. Arun told The Hindu, “Owing to the lockdown, ganja smugglers are carrying ganja in vehicles meant for transporting essential commodities. However, we have intensified our raids over the past few weeks and have enhanced our patrolling and checking at vehicle check points. This was a major catch. We will continue to raid smugglers of ganja and sellers, and will not allow the sale of ganja in the city. More than 1,000 kg ganja was seized from drug peddlers in the North Chennai area from the first week of July.”