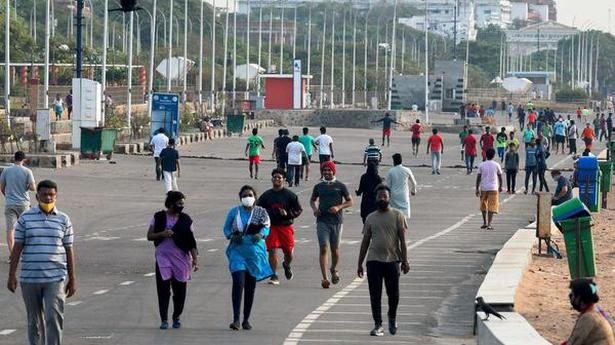 Its not just markets in the city that residents are crowding at: flouting lockdown norms, many residents have resumed their workouts at beaches of the city, especially at Marina, risking the spread of COVID-19.

While a few residents were seen wearing masks and following physical distancing norms, many others did not follow safety measures.

Beaches in the city have always been a haven for fitness enthusiasts. People practise all forms of exercise, ranging from yoga sessions to boxing and gymnastics to walking, running and even football.

However, from 3 p.m. on March 21, all beaches in the city, including Marina Beach, Thiruvanmiyur, Palavakkam and Elliot’s Beach, were shut by the Greater Chennai Corporation (GCC). The GCC had announced that entry into the beaches would be stopped until further orders. This decision was taken keeping in mind the safety of the public, as many people used to visit beaches every day, for fitness and leisure.

Though residents did not venture into the beaches for several weeks, of late many are seen exercising, practising gymnastics, yoga, boxing, walking and running on the beach sands.

“They have opened offices and shops now, so they can also open the beaches in the morning for workouts,” said M. Gomathi, a resident of Triplicane, who was walking on the Marina Beach.

T. Arunachalam, secretary, East Coast Road Walkers Association, said that it was not advisable for people to walk on the beach and the association had asked its members not to go to the beach. “Those above the age of 60 should stay indoors. Many claim that Marina Beach has been opened to walkers and have started walking at Thiruvanmiyur and other beaches. Policemen are issuing warnings, but many don’t listen. What is worse is that many do not wear masks properly,” he said.

Meanwhile a senior police officer said that the beach was still not open to the public. “We have barricaded close to 15 entry and exit points. But people manage to sneak in. Strict action will be taken against those who are found walking at the beach,” said a police officer.