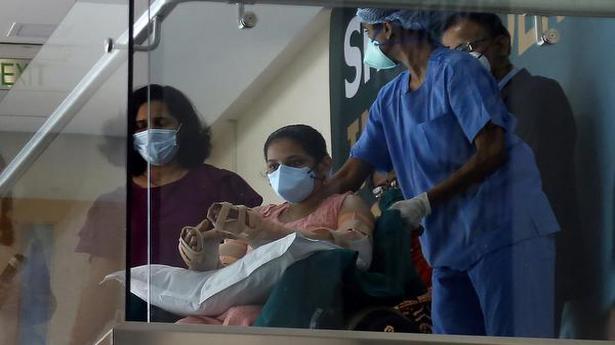 A Chennai family’s decision to generously donate the organs of a young engineer, in the thick of the pandemic, has given a new hands to Mumbai’s Monika More, 24, who had lost both her hands in an accident in 2014.

Doctors at Mumbai’s privately-run Global Hospital, supported by teams of medical experts from Mumbai, Chennai and Kochi, last month successfully conducted the rare bilateral hand transplant on Ms. More. She was discharged from the hospital on Saturday after month-long treatment to continue her rehabilitation.

Ms. More, a resident of Kurla here, underwent a 16-hour bilateral (double hand) transplant procedure on August 28, 2020 soon after the limbs reached the hospital after being flown in by a chartered plane.

So far, her recovery has been satisfactory, and it would take another 18 months before Ms. More is able to use both her hands again after a gap of six years.

She lost both her hands after falling into a gap between a suburban local train and the platform at Ghatkopar, Mumbai. She tried to use prosthetic limbs for a few months, but later applied for bilateral hand transplant at the hospital.

“On several occasions, there were potential organ donors who could have donated their hands for Monika, but she missed the opportunities as the donor families did not agree to external limb donation, which is considered a taboo. Finally, a suitable donor was identified in Chennai and we did not waste time and the rare opportunity,” said Dr. Nilesh G. Satbhai, consultant-plastic, aesthetic, hand and reconstructive microsurgeon, Global Hospitals, Mumbai.

In accordance with protocol, the donor has not been identified. What has been shared is that the donor was a brain-dead young engineer, whose family generously agreed to donate all limbs, giving new life to six different patients, including Ms. More.

“After performing the complex procedure successfully, Monika was put on immunosuppressant medication. She was kept in the transplant ICU in a separate room, with a dedicated nurse, as strict care and isolation was needed. Regular dressings were done for both the hands,” Dr. Satbhai said.

“The patient was able to sit up and walk with support for her arms on the third day itself. She was given physiotherapy twice a day, along with breathing and shoulder exercises. She initially had a plaster slab above the elbow till the hand to support the bones, and will need splints for more than a month,” he added.

Special care was taken, considering the COVID-19 pandemic. The hospital bill of ₹36 lakh at cost will be met through donations as Ms. More comes from a middle class family.

Elaborating on the procedure, Dr. Amresh Baliarsing, senior plastic and microvascular surgeon, Bombay Hospital, said, “In a hand transplant, you have to join the veins at multiple points to enable the hand and fingers to function properly. The bone points have to join first. At least three main nerves need to be joined and there are so many mussels to join. This makes the hand transplant difficult, and different from other internal organ transplants.”

He said it would take another three to four months for the patient’s recovery to start, and the entire process may take 18 months, with medication for life time. Once the hands start functioning, and after physiotherapy, she will be more independent, Dr. Baliarsing said.

Currently, Ms. More is on oral medications and is taking immunosuppressant doses to prevent her body from rejecting the new limbs.

Since this will diminish her immunity, she has been instructed to avoid all social gatherings.

A visibly moved Ms. More said her father had always dreamed that she would get back her hands. “His dream is going to be fulfilled. I became emotional after the transplant as I strongly believed that I will get new hands now,” she said.

“I always wanted to become independent and I am happy that I will be able to do so. I thank my late father, my mother and brother, the family of the donor, and the doctors, who have given me a fresh lease of life,” she added.

Dr. Vivek Talaulikar, chief executive officer, Global Hospital, Mumbai said, “In the time of the pandemic, a family in Chennai became a beacon of hope for the young girl by deciding to donate hands as this is very rare donation. The successful completion of the surgery and discharge of the patient is significant as this was never attempted before by any private hospital in India. Now, more donors should come forward to donate external limbs and give new lease of life to people who are in need.”