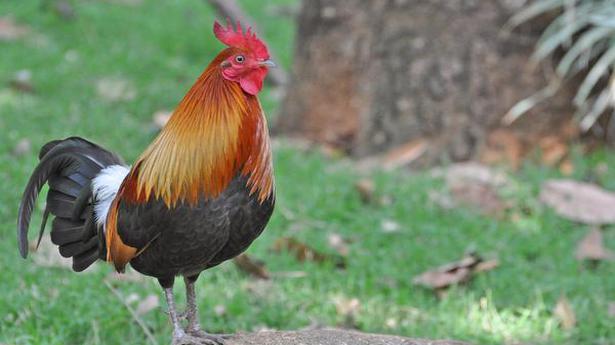 “Our study suggests that domestic chickens were initially derived from the Red Jungle Fowl sub-species Gallus gallus spadiceus whose present-day distribution is predominantly in south-western China, northern Thailand and Myanmar,” said the paper, ‘863 genomes reveal the origin and domestication of chicken’, which was published in Cell Research, an international journal.

Mukesh Thakur, a scientist of the Zoological Survey of India ( ZSI), who contributed to the study, said the results contradicted the earlier claim that chickens were domesticated in northern China and the Indus Valley.

“The research assumes significance as despite the substantial role played by chickens in human societies across the world, both the geographic and temporal origins of their domestication remain controversial,” Dr. Thakur said.

Scientists across the world contributed to the study in which DNA from indigenous village chicken, four species of wild jungle fowl and domesticated chicken were collected and analysed. Dr. Thakur said Wang Ming-Shan of the University of California, Professor Wu Dong Dong of the Chinese Academy of Sciences and Professor Han Jianlin of the International Livestock Research Institute, Nairobi, Kenya, contributed to the study done over several years.

The question of domestication of chickens has intrigued scientists for centuries, and has been the subject of debate. Charles Darwin postulated that chickens were domesticated around 4,000 B.C. from a single ancestor, Red Jungle Fowl in the Indus Valley. An important study published earlier from Uppsala University claimed the Grey Jungle Fowl had contributed to chicken domestication. With this, a couple of studies from India, China and other South-Asian countries have argued the monophyletic origin of chicken. “Our study provides novel insights into the evolutionary history of domestic chickens and a valuable resource to facilitate the ongoing genetic and functional investigations of the world’s most numerous domestic animals,” Dr. Thakur said.

He said the study showed that following their domestication, chickens were trans-located across South-east and South Asia where they interbred with Red Jungle Fowl sub-species and other jungle fowl species. “The results further reveal that domestic chickens undergo genetic adaptations that underlie their unique behavioural, morphological and reproductive traits,” he said.

ZSI Director Kailash Chandra said the efforts by Dr. Thakur and other scientists in unveiling the mystery over chicken domestication would help in identifying ecological adaptation and phenotypic plasticity among the five sub-species of Red Jungle Fowl. The study, he said, was the outcome of the largest genomic data ever generated on any species.

Google to pay publishers $1 billion over three years for their...