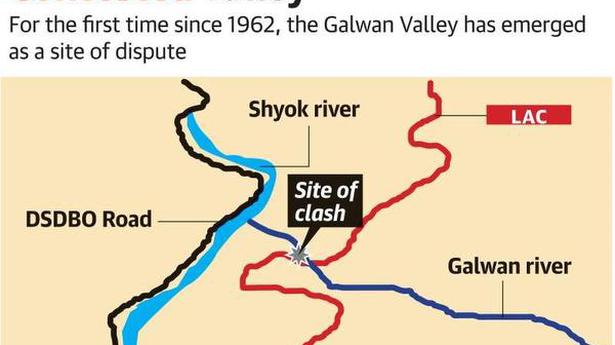 Officials from China’s People’s Liberation Army (PLA) and the Foreign Ministry on Wednesday said China had demanded a withdrawal of Indian personnel and facilities from Galwan Valley at the June 6 Corps Commander talks.

A clash on June 15 in the valley, which India has said took place when a violent face-off occurred during the de-escalation process agreed to at the talks, claimed the lives of 20 Indian soldiers.

The Chinese Foreign Ministry and the Defence Ministry on Wednesday accused India of breaking the June 6 agreement, and claimed India had agreed to not patrol in the valley or build facilities there.

The valley begins from the confluence of the Galwan and Shyok rivers, but the Line of Actual Control (LAC) runs east of the confluence in the valley. China, however, is now demanding an Indian withdrawal from the entire valley and limiting India to the Galwan estuary where it meets the Shyok. Wednesday’s comments from Beijing suggest it is describing the LAC at the “estuary” of the river.

Foreign Ministry spokesperson Zhao Lijian said: “It is the Indian side that went against the bilateral agreement. The Indian side at first agreed to withdraw personnel from Galwan Valley and so it did, and it dismantled its facilities as requested by the Chinese side. During the first Commander meeting on June 6, the Indian side committed to no trespassing of the Galwan Valley for patrolling and for building. The two sides agreed to set up observatory posts at the two sides of the Galwan river estuary, but the Indian side went against this agreement and asked China to dismantle China’s posts, and also it crossed the Line of Actual Control (LAC)”, which led to the clash.

India, however, said the clash was triggered by China violating the June 6 agreement, and setting up a post on India’s side of the LAC. Indian officials said the LAC that both sides had been observing has been east of the confluence of the Galwan and Shyok, near Patrolling Point 14, where the clash occurred.

On Wednesday, PLA Senior Colonel and Defence Ministry spokesperson Wu Qian said “China has sovereignty over Galwan Valley” and “for many years, Chinese border guards have been patrolling and performing their duties here.”

“Since April this year, the Indian border defence forces have unilaterally built facilities in the region, and China has repeatedly made representations and protests on this. In the early hours of May 6, the Indian border guards crossed the line and entered the Chinese territory to construct barriers, blocking the normal patrol of the Chinese border guards, and attempted to unilaterally change the status of border control. The Chinese border defence force had to take necessary measures to strengthen on-site response and control of the border area,” he said.

At the Corps Commander level meet on June 6, he said, both sides agreed “to take practical measures to ease the situation in the border areas.” This included India “promising not to patrol and build facilities at the mouth of the Galwan river”, or the Galwan-Shyok confluence. The two sides agreed to withdraw the troops in batches through a meeting of local commanders.

“What is shocking is that on the evening of June 15, the Indian front line frontier troops openly violated the consensus reached by the two parties [on June 6], went back and forth across the line, crossed the LAC again and deliberately provoked China,” he said.

India, however, has stressed that it was the Chinese side that attacked its troops in a “pre-meditated” manner, following a dispute over a tent set up by China on India’s side of the LAC.

Senior Colonel Wu also said that the Defence Ministers of the two countries had been in communication over phone following the incident.

He said, “The Chinese border guards have taken decisive measures to defend themselves and resolutely responded to the violent acts of the Indian side, effectively safeguarding national sovereignty and territorial integrity. The incident was entirely caused by India’s violation of consensus and unilateral provocation. It happened entirely on the Chinese side of the LAC approved by both parties The responsibility lies entirely with India. The Chinese side requires the Indian side to severely punish the perpetrators and strictly control the front line troops to ensure that such incidents will not happen again.”

Senior Colonel Wu said both sides had been in touch through military and diplomatic channels following the clash. “China and India are important neighbours to each other, and maintaining peace and tranquility in the border area is in the common interests of both parties and requires the joint efforts of both parties. We hope that India and China will meet each other halfway, effectively implement the important consensus between the leaders of the two countries, strictly abide by the agreement reached by the two parties, continue to properly resolve relevant issues through dialogue and negotiation at all levels. We will make joint efforts to ease the situation in the border areas and maintain peace and stability in the border areas,” he said.