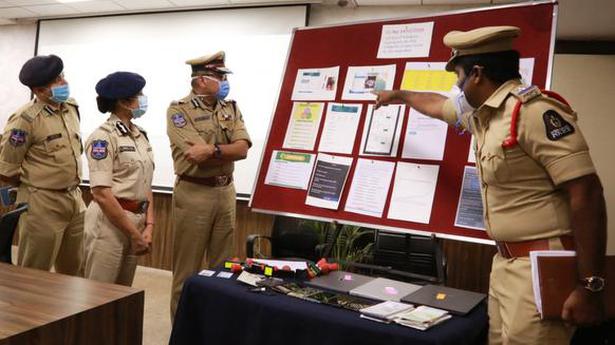 A Chinese national and his three associates from New Delhi were arrested by Hyderabad police on Thursday for organising online gambling.

The arrest came after the Income Tax Department launched a probe into money laundering against several Chinese nationals.

During the course of investigation, the sleuths of Central Crime Station found that the online gambling was organised by various companies under the blanket of Beijing T Power Company, a firm based out of China.

A case was registered after two people from city, who were cheated by the gambling website of ₹97,000 and ₹1.64 lakh respectively.

The total value of inward transaction on the two bank accounts traced so far is nearly ₹ 1,100 crore and majority transactions took place this year.

“Most of the remittances have been transferred to different other accounts which are being traced and some of the accounts are overseas. Total overseas remittances known as of now is nearly ₹ 110 crore. The group was planning to register a company in Cayman Islands,” said Hyderabad Police Commissioner Anjani Kumar.

However, the officers could freeze only ₹ 30 crore, which is parked in various bank accounts in the country. Online gambling is banned in Telangana.

“The domain name servers of the gaming websites are based out of China and the data hosting services is Cloud-based in the US, which is operated from China. The entire technical operation is run by the China-based directors/partners of these companies,” Mr. Kumar said.

According to him, the payments were being routed through India-based payment service providers or gateways and in this case it was Paytm.

The bank Accounts and payment gateways were linked to the companies named Linkyun, Dokypay and SpotPay and several others. Mr. Kumar said that the effort of the group is to constantly establish new companies and more operations from one company to other.

The games were organised by initiating prospective gamers through Telegram groups and the entry is by ‘reference only’ and members who introduce a certain member of new members were paid commissions.

“Admin of the groups will usually indicate the websites on which the registered members can play games and place wagers/bets. These websites would be changed on a daily basis. In this particular format it was found that players would place bets on colours in a game called Colour Prediction,” the Police Commissioner said.

He said that in recent times cases of suicide due to online betting were reported from the State and other parts of the country which will be investigated from this angle.

The police also found that those groups are possibly involved in other Cyber Crime activities like Phishing, running banned apps and dating apps.

There are nearly 28 complaints from different States, and the respective State police will be informed about the arrests for action from their end, Mr. Kumar said.

“Co-operation will be sought from other agencies for evaluating financial transaction and compliance with other laws,” he added.