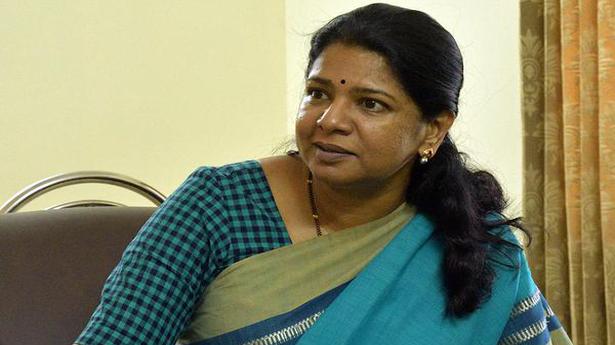 Kanimozhi said a woman officer at the Chennai airport asked her if she was Indian for not speaking in Hindi.


The Central Industrial Security Force (CISF) on Sunday ordered an inquiry soon after DMK MP Kanimozhi’s complained that a woman officer of the paramilitary agency at the Chennai airport had asked her if she was Indian for not speaking in Hindi.

“It would not have been an issue if the incident took place in Delhi. Surprisingly it happened at Chennai airport,” Ms Kanimozhi told The Hindu.

Soon after she encountered the experience while proceeding to New Delhi, the Thoothukudi MP had tweeted, “Today at the airport a CISF officer asked me if I am an Indian, when I asked her to speak to me in Tamil or in English as I did not know Hindi. I would like to know from when being Indian is equal to knowing Hindi.”

Soon the CISF headquarters responded promising appropriate action. “We sincerely acknowledge your unpleasant experience. Kindly DM journey details; name of the airport, location, date and time of the incident for appropriate action in the matter,” the agency said.

“The message from the CISF came when I was on the flight. When I reached Delhi, two officers from the CISF met me and promised action. They said it should not have happened,” Ms. Kanimozhi told this Correspondent.

“The CISF DIG from Chennai also spoke to me over the phone,” said the DMK leader, who had gone to Delhi to attend the Joint Parliamentary Committee on Personal Data Protection Bill and the Standing Committee on Chemical and Fertilizers said.

She said normally officers from south India would be employed in Chennai airport to avoid any inconvenience to the passengers. “But this time a North Indian officer was there,” she said.

Subsequently the CISF informed her that it had ordered an inquiry into the matter. “It is not the policy of the CISF to insist upon any particular language,” the agency said.

Ms Kanimozhi thanked the CISF for “immediate response and assurance to take action.”