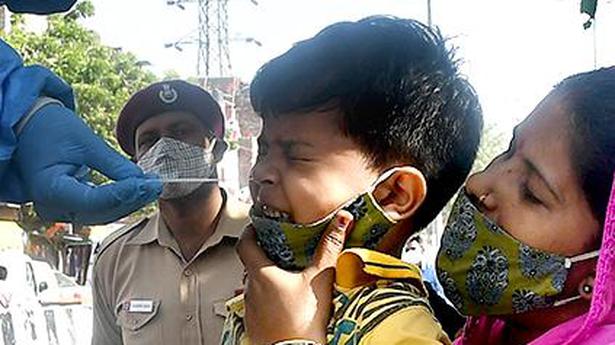 Labs in Delhi have a capacity to conduct around 19,500 RT-PCR tests a day to detect COVID-19, a review by the Delhi government has shown, said officials.

Till now, the Delhi government had maintained that the capacity was around 14,000 RT-PCR tests a day and that an average of 9,626 such tests were done daily in September.

The review was done after the Centre last week informed the Aam Aadmi Party (AAP) government that Delhi has the capacity to do 27,000 RT-PCR tests daily.

“After the Centre sent a list which said that city labs can do 27,000 tests, the Delhi government reached out to the labs individually. According to data from the labs, Delhi can do around 19,500 RT-PCR tests a day, which is much less than the Centre’s figures,” a government official told The Hindu.

Two types of tests are done to test for COVID-19 in the city: RT-PCR and Rapid Antigen Test (RAT). RT-PCR test is considered the gold standard and gives more accurate results compared to RAT. Results of RT-PCR take 24 hours, while RAT takes only 30 minutes.

“The expert committee will prepare a revised COVID strategy, which will have details of how to increase RT- PCR testing, and also a new plan for containment zones. The government is currently doing around 10,000 RT-PCR tests daily… this has to be increased by around 10,000 to reach 20,000,” a second official said, confirming the reviewed data.

In a related development, the Delhi government, following a High Court order, has sent a map with locations of all COVID-19 testing centres in the city to the Delhi Metro Rail Corporation so they can be put up in metro stations. The public will be able see these maps at the stations from later this week, according to officials.

The map has been developed by Geospatial Delhi Limited, a Delhi government company, and it will be uploaded on government websites too.