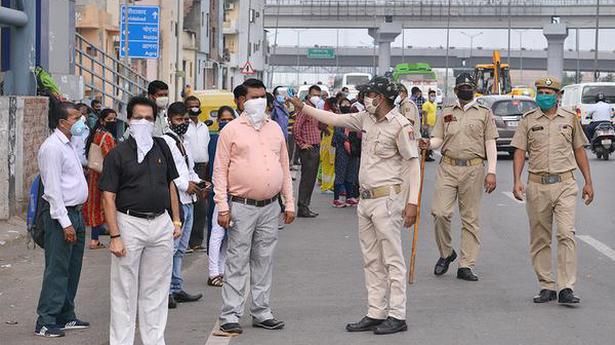 A total of 1,475 new COVID-19 cases were reported in the Capital in the past 24 hours, taking the total to 1,21,582, according to a health bulletin released by the Delhi government on Saturday.

However, since then, the number of new cases has been dropping and it has been less than 2,000 for the past eight days.

The number of cases is less compared to the spike in June, but of the total 21,658 tests done in the past 24 hours, over 71.11% of the tests were rapid antigen tests, which have shown a low positivity in the city compared to RT-PCR tests.

Also, the number of people admitted to COVID-19 hospitals has been steadily decreasing for the past 17 days.

Also, the positivity rate, which is the percentage of people who test positive, has dropped from 12.2% on July 1 to 6.8% on Saturday. The number of containment zones in the city was 678.

Meanwhile, the Delhi government has issued an “office memorandum” that specific attention should be given to reduce COVID-19-related deaths, since committees formed after Supreme Court orders are inspecting all hospitals.

“Since the committees constituted for inspection of all hospitals in Delhi, consequent upon orders passed by Supreme Court on 19 June, 2020, are already carrying out their mandate in a continuous manner, it would be appropriate that specific attention may now be focused upon aspects which have a bearing on reduction of COVID related mortalities,” the memorandum issued by principal secretary of Health and Family Welfare Department of the Delhi government dated Friday read.