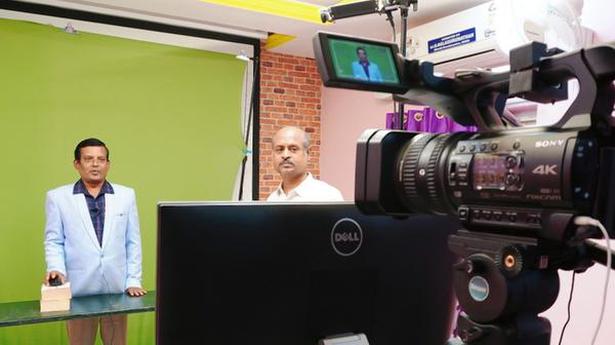 Chief Minister Edappadi K. Palaniswami on Tuesday launched televised lessons for Class X students through Kalvi TV. The lessons would be broadcast on the State-run channel for two-and-a-half hours every day, from Monday to Friday.

Mr. Palaniswami also launched the distribution of free textbooks for students of Classes X and XII for the 2020-21 academic year. Lessons for students of other classes would also be broadcast, an official press release stated.

The Chief Minister inaugurated a scheme for downloading video lessons for Class XII students through hi-tech labs set up at government and aided schools across the State.

Commissioner of School Education Siji Thomas Vaidyan, who headed a committee tasked with finding ways to tackle the challenges faced by the School Education Department due to the COVID-19 lockdown, submitted a report to the Chief Minister.

The Chief Minister inaugurated, through videoconference, roads that underwent improvements in various places in Chengalpattu, Kancheepuram and Tiruvannamalai districts at a total cost of ₹217 crore.

Besides, the Chief Minister laid the foundation stone for a subway at Chromepet in Chennai at a cost of ₹28.99 crore.

Minister for Rural Industries P. Benjamin, Highways Secretary A. Karthik and senior officials were present at the event.