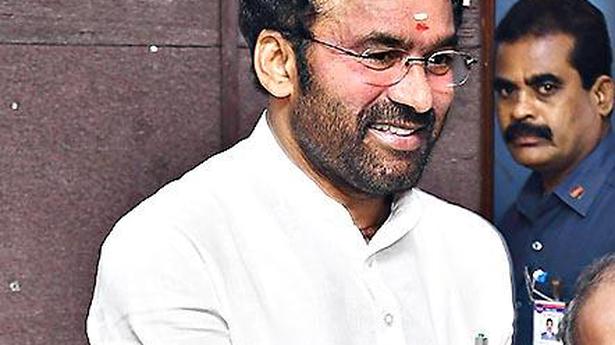 Union Minister of State for Home G. Kishan Reddy has appealed to Chief Minister K. Chandrasekhar Rao to introspect why people are losing confidence in government hospitals and initiate steps to revive that confidence.

Gandhi Hospital, the State’s largest COVID isolation centre, has over 200 ventilators and yet, people are scared to get admitted there, he said, adding that it was time that the State government seriously work to infuse confidence in people, he said at a press conference here. The Central government was ready to assist the government in all areas as it has been doing like supplying necessary ventilators and PPE kits, he said.

He was speaking to the media after visiting the Gandhi Hospital and interacting with the staff. He requested additional incentives for the medical staff who are risking their lives to treat COVID patients. The Union Minister said the poor and middle class people were scared to go to Gandhi Hospital and also feared the private hospitals that were charging exorbitantly.

He requested the State government to have some control over private hospitals to ensure people were not fleeced, and mentioned he too has received several complaints in this regard. He also stressed the need to step up testing, tracing and treating the patients.

He said NIMS has acquired a facility, which could test 3,000 people per day and the machine costs just ₹95 lakh. “The government can procure similar machines for nine old districts of Telangana and keep them ready. It would not cost more than ₹10 crore and can be used in future also,” he said.

Mr. Kishan Reddy said the Central government has sent 7.44 lakh N-95 masks and 2.41 lakh PPE kits to Telangana. It was decided to provide 1220 ventilators of which 888 have already been given and about 2.25 lakh testing kits have also been sent. In addition to these, ₹215 crore has been given by the cCentral government to spend on any facility for COVID patients.

Mr. Reddy said he was in regular touch with Health Minister Eatala Rajender and had expressed concerns over shortage of doctors and medical staff. The Central government was training its staff in AIIMS in all states, including AIIMS Bibinagar.

Global labour income estimated to have declined by $3.5 trillion in...