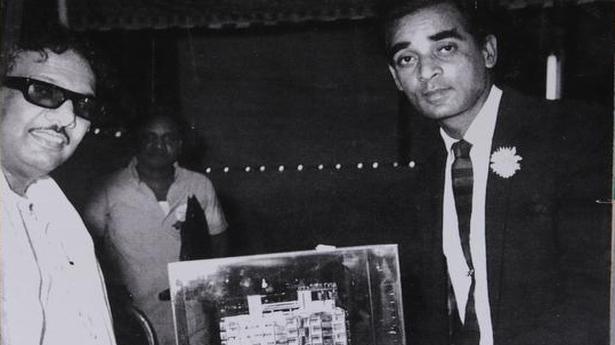 He was known for his free-hand design sketches and is credited with designing both the Anna and the Periyar Memorials.


Chennai is home to several architectural marvels that reflect the city’s history and culture. Many of them continue to remain landmarks even as the city’s skyline is frequently redrawn with new structures.

Some of landmark buildings designed by one of the key modern architects, Atchyut Chundur, stand testimony to his creative designs. His son and filmmaker, actor Premsai Chundur plans to launch a coffee table book soon as a tribute to mark the tenth death anniversary of Atchyut who died in August 2010.

One of the initial projects that brought Atchyut into the limelight was the design of the University of Madras Centenary buildings in Chepauk. He went on to design several structures in diverse fields from public buildings, hotels to healthcare and educational institutions. Another significant project designed by Atchyut is the Anna Memorial built for former Chief Minister C.N. Annadurai in Marina beach with the arch shaped like an elephant’s tusks.

Recalling his father’s initial projects, Mr. Premsai said he started his practice in Chennai through his architectural firm Atchyut and Associates during the 1960s. “He designed the Anna Memorial overnight. He also designed the Periyar Memorial signifying that he was a torch bearer of reforms,” he said.

He was known for his free-hand design sketches. Functionality was the key element in his designs rather than aesthetics. Skeletal walls and cantilevers that adorned the facades of the structures were some of his signature styles.

Atchyut was also called as a ‘hotel architect’ as he designed several hotels such as Hotel Maris, Swagath, Kanchi and cottages in New Woodlands. Besides important buildings such as Parsn Complex and the Indian Bank on Rajaji Salai, he also pioneered the concept of supermarkets with his design of the supermarket chain Kamadhenu.

“He also introduced the concept of residential apartment complexes in the city. I plan to launch a book on his architectural masterpieces in a few months,” he added.