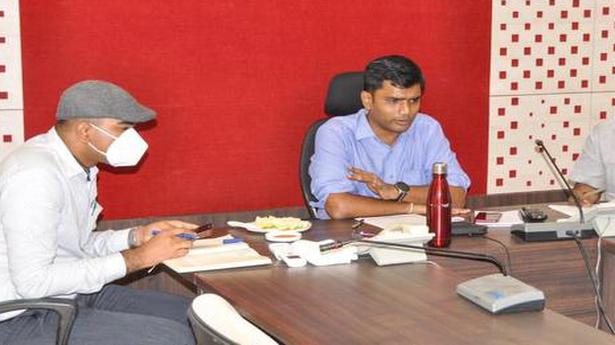 The steady rise in COVID-19 cases during the last one month has forced the district medical and health administration to step up efforts to trace the primary and secondary contacts in all municipalities and rural areas in Chittoor district even as the tally inched closer to 25,000, including 240 deaths by Monday.

Collector Narayana Bharat Gupta, at an emergency meeting with the task force officials here on Monday, said that between July 15 and August 15, over 120 deaths were reported in the district. He expressed concern at the slowing down of the contact tracing in the urban areas, while the drive had picked up pace tremendously in the rural areas.

The Collector said that the municipalities of Puttur, Punganur and Madanapalle lagged behind in tracing of the contacts, while there was a good stead in Srikalahasti. The Collector was informed that hectic efforts were under way to trace about 6,000 contacts, both primary and secondary, in the urban areas. “Virus spread and the casualty rate could be curtailed only through stern focus on tracing the contacts,” he said.

Mr Gupta further said that delay in conducting tests and publishing the results should be avoided forthwith as this would also lead to spread of the virus. “Keeping patients aged above 50 under home isolation should be discouraged, and they should be shifted to the COVID Care Centres and hospitals,” he said.

District Medical and Health Officer Dr M. Penchalaiah said that “mapping process” should be intensified by enhancing tracing of the primary and secondary contacts. “Whenever a positive case emerges, the tests should be conducted for persons in the neighbourhood as per the mapping, otherwise it would be difficult to tackle the pandemic,” he said.

International mobile roaming service to be kept ‘inactive’ by default to...

All interim orders to continue till Oct. 31: HC