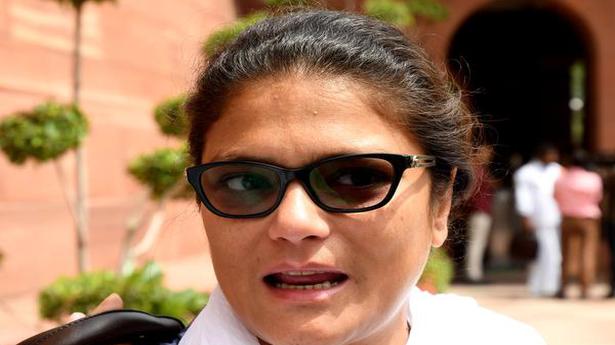 The Congress on Monday demanded a judicial inquiry into the Hathras gangrape incident and the immediate removal of the District Magistrate (DM) Praveen Kumar Laxkar, whom the victim’s family has accused of misbehaviour.

“First of all Yogi Adityanathji’s government must immediately dismiss the DM, who is on record, on a video threatening the family. He should not be given any other posting till it is thoroughly investigated at whose behest the DM went to the family and threatened them in the manner that he did,” All India Mahila Congress chief Sushmita Dev said at a press conference.

“Secondly, the family of the victim is also demanding a judicial inquiry by a sitting judge of the Supreme Court… It is shocking that an Special Investigation Team (SIT) was set up after 14 days and after the media and Opposition leaders, specifically Priyanka Gandhi-ji and Rahul Gandhi-ji met the victim’s family in Hathras, they ordered a CBI inquiry as damage control,” Ms. Dev said.

The party also released a 9-minute video “Hathras: Fight for Justice” on the visit by Congress leaders to the victim’s family on Mr. Gandhi’s Facebook page and YouTube channel.

In the video, Mr. Gandhi is seen assuring family members that “none can remove [you]… because it is your house, your land. If they try to do so, I will be here”.

The social media outreach is aimed leveraging the growing traffic to Mr. Gandhi’s social media handles in the past few days.

Data shared by a Congress functionary shows that Mr. Gandhi’s followers on Facebook grew by 1,449% between September 25 and October 2.