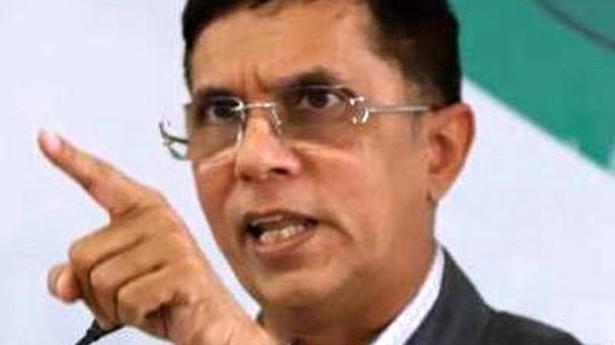 Private mining companies have defrauded the Union government of ₹12,000 crore by evading export duty via “illegal export” of iron ore since 2014, the Congress alleged on Thursday and demanded an inquiry into what it described as a “Modi-made iron ore scam”.

Addressing a press conference, party spokesperson Pawan Khera said a Law Ministry note of September 10 pointed out that only Kudremukh Iron Ore Company Limited (KIOCL), a flagship company under Ministry of Steel, was allowed to export iron ore. But in the past six years several private mining companies were also engaged in illegal export of iron ore pellets.

The party also circulated copies of the Law Ministry note to highlight the fact the issue has been flagged within the government.

The Congress spokesperson claimed that the illegal export of iron ore pellets started after the Modi government made changes to the iron ore export policy in 2014 and allowed the export of high quality iron ore and waived off 30 % duty on export of pellets.

“It is estimated that these private firms have exported iron ore worth ₹40,000 crore since 2014, violating the law as they did not have the license to export the ore. However, these private players, as expected, have not been reprimanded or questioned by the Central Government and continue to flourish by exporting iron ore pellets,” Mr. Khera alleged.

“Even private firms that had iron ore mines for personal consumption started exporting iron ore pellets by seeing this opportunity and in collusion with Ministry officials… By not paying the export duty, the private players have robbed the government of around ₹12,000 crore in duty fee. Under the Foreign Trade Development and Regulation Act 1992, these private players are liable to a penalty of ₹2,00,000 crore for this gross illegality ,” he added.

Demanding that a detailed list of firms exporting iron ore illegally be made public, the Congress asked, “Since 2014 has the government questioned any private entity regarding their illegal dealings vis-a-vis iron ore export? What action has been initiated, if any against the officials of the Steel Ministry who allowed illegal export to take place.”