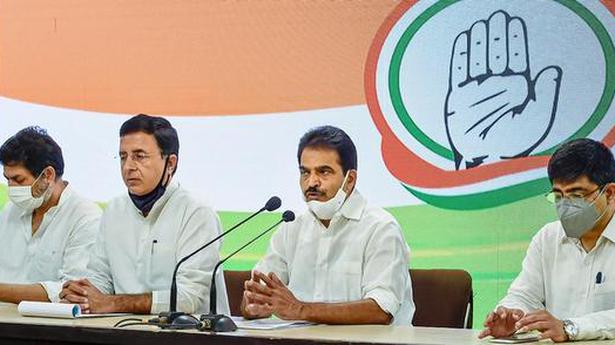 After getting rapped on the knuckles by the Congress Working Committee (CWC) for making public the letter written to Congress president Sonia Gandhi, raising a host of questions on the party’s functioning, the group of leaders who authored the letter had a long meeting at party General Secretary Ghulam Nabi Azad’s residence in Delhi.

According to sources, the meeting, held soon after the seven-hour CWC meeting, was attended by Anand Sharma, Mukul Wasnik, Kapil Sibal, Shashi Tharoor and Manish Tewari.

Though the CWC ended on a conciliatory note, it clearly said “inner party issues cannot be deliberated through the media or in public fora. The CWC urges and advises all concerned to raise such issues only in party fora in the interest of propriety and discipline.”

Out of the signatories only four are part of the CWC — Mr. Azad, Mr. Sharma, Mr. Wasnik and Jitin Prasada. Also, another CWC member, Deependra Hooda’s father Bhupender Hooda, signed the letter.

These four were bitterly attacked during the meeting with many personal remarks directed at them. Gandhi family loyalist Ambika Soni said Mr. Azad is the only person who is holding a constitutional position, as Leader of the Opposition in the Rajya Sabha, after the 2014 debacle. Ms. Soni also raked up the subject of Mr. Prasada’s father, Jitendra Prasada, having fought against Ms. Gandhi. According to sources, Mr. Prasada said it was unfortunate that the letter got leaked, but it was not to undermine the Gandhi family or weaken the party. He also said that he would welcome any action that the CWC decides to take against him and other signatories.

Mr. Sharma, it is learnt, proposed during the meeting that the letter should be made public to clear the air that it did not target any individual. The suggestion was not agreed upon.

Senior party leaders indicated that there will be no immediate repercussion or disciplinary action.