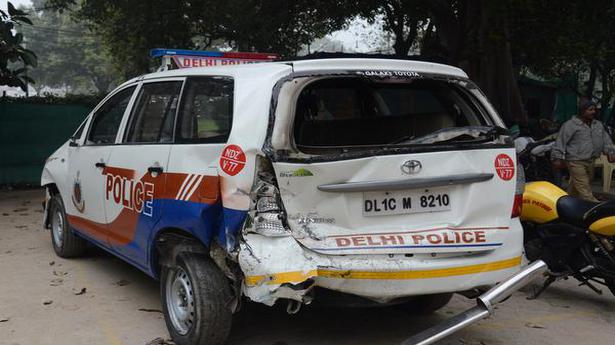 The impact of the collision was such that the patrolling vehicle overturned, skid for 10-15 feet and Head Constable Wazir Singh (50) got stuck inside the vehicle, an officer said


A constable was killed and another injured after a speeding car driven by an inebriated 19-year-old rammed into their patrolling vehicle in north Delhi in the early hours of Monday, police said.

The impact of the collision was such that the patrolling vehicle overturned, skid for 10-15 feet and Head Constable Wazir Singh (50) got stuck inside the vehicle, an officer said.

Tushar Gupta was returning home after meeting a friend when his Honda City rammed into the patrolling vehicle near Khalsa College at around 1.30 a.m., the officer said.

Constable Amit, who was driving the vehicle, rescued Singh with the help of the people and shifted him to a hospital where he succumbed to his injuries, Deputy Commissioner of Police (North) Monika Bhardwaj said.

Amit sustained injuries and has been discharged from hospital, Bhardwaj said.

Gupta, a college student who is a resident of Model Town, was also injured and he has been arrested, the DCP said.

In the medical report, the doctors said the teenager was under the influence of alcohol at the time of the accident, according to the police.

A case under sections 304 (culpable homicide not amounting to murder), 279 (rash driving) and 337 (causing hurt by act of endangering life) of the Indian Penal Code has been registered, the DCP said.

Delhi: On way to work, security guard dies after being hit by van | Delhi News – Times of India