Home Cities Chennai Coronavirus | Are government hospitals in Chennai running out of beds? 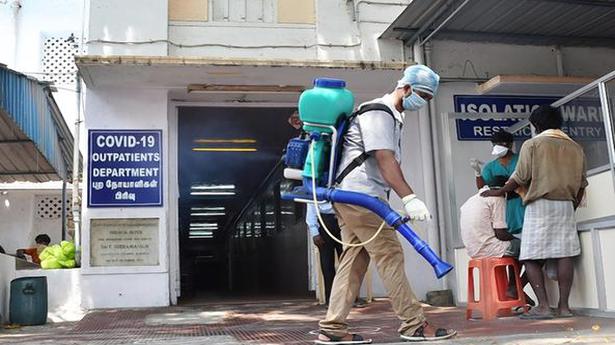 Do government hospitals in Chennai have enough beds for COVID-19 patients? While the State government is maintaining that there are adequate beds in the city, many of their own doctors beg to differ.

Chennai has been reporting 1,000-plus cases every day for six consecutive days. As per the Health Department’s bulletin, there are 11,817 active cases — persons under treatment — in the city. Many doctors in the four government hospitals pointed out that the institutions are running at almost capacity. At least three of these hospitals have over 400 patients each.

“The problem is the surge in cases. The hospital’s bed capacity is almost full. We are admitting on a need basis. Once patients are stable, we move them to step-down wards to make way to admit critical patients. However, we can manage this way for a week as critically-ill patients will become stagnant in the hospital,” a senior doctor in one of the government hospitals said.

“We have many more patients than the actual treating capacity. We cannot take even one more patient,” another government doctor said.

He added that patients aged above 55 years and those with co-morbidities cannot be sent to COVID-19 Care Centres (CCC).

“At a given time, we will have around 300 patients who cannot be shifted. We discharge patients, and admit persons who are waiting. The government is augmenting bed strength simultaneously,” he said.

At another institution, doctors said they were running to near-full capacity.

“The majority of the patients who are coming are sick. Even then, we are unable to accommodate as cases have surged exponentially,” one of them said. A few beds that were available did not have oxygen supply.

A doctor on COVID-19 duty in another government hospital said the number of beds were being increased as physical space was available.

“No patient is sent out for want of a bed. For those with mild symptoms, we send them to CCC after three days. However, in two or three weeks, we will reach the stage of nil available beds in all hospitals, if the number of cases continue rising at the same rate.”

Senior government doctors said all private medical colleges in and around Chennai can be roped in instead of making arrangements in arts and engineering colleges. “These medical colleges already have medical and paramedical personnel on their payroll. Taking non-medical institutions and posting healthcare workers is an additional burden,” a senior doctor said.

For the past three to four days, there were instances of ambulances carrying patients, driving from one hospital to another for want of beds, official sources said. Last week, an elderly woman with complaints of fever and breathlessness was turned away by five private hospitals in the city. Her relative said one hospital did not allow her to get down from the car for two hours and she was declared brought dead at one of the government hospitals.

Of the 26 private hospitals and medical college hospitals listed on stopcorona.tn.gov.in website, six hospitals had no beds available. Phone calls went unanswered/switched off in two hospitals where beds were available, while representatives of two other hospitals stated that they would be able to give the bed availability status only depending on the discharges in the morning.

The government maternity hospitals have at least 100 beds allocated for pregnant women testing positive for COVID-19. Besides, there are at least 500 vacant beds in CCCs, and many beds at private medical colleges in and around Chennai.

“There are vacant beds in these government hospitals. But we are reserving them for really sick and symptomatic patients. We are finding it difficult to shift patients who are relieved of symptoms from these hospitals to CCCs. Many are unwilling to move. If they are shifted, more beds will become available for sick patients,” an official said.

A man close to his roots

S.P. Balasubrahmanyam to be cremated with State honours