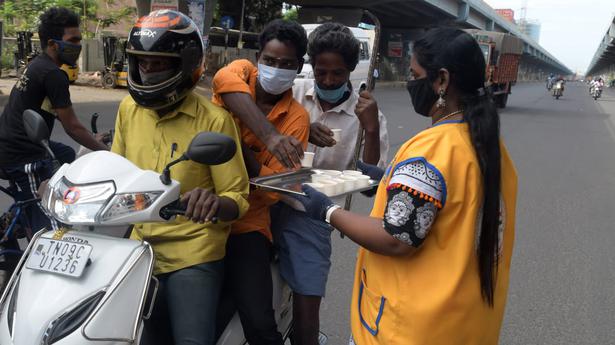 Chennai accounted for less than a third of the 4,231 fresh COVID-19 cases recorded in Tamil Nadu on Thursday. While the total number of persons discharged after treatment went past 50,000 in the city, a 25-day-old baby with a congenital anomaly was among the 65 fatalities reported across the State.

After recording less than 4,000 cases for three consecutive days, Tamil Nadu saw an increase, with 4,231 persons testing positive. This took its overall tally to 1,26,581*.

The infant, from Tiruvannamalai, was admitted to the Institute of Child Health and Hospital for Children, Chennai, on June 27. She underwent three surgeries for a congenital anomaly. “The baby had Hirschsprung’s disease (congenital megacolon). Usually, a surgery is done in two stages. We took the baby for surgery after sending a sample for COVID-19 testing. The first surgery was for ileostomy. The swab returned positive for COVID-19, and the baby’s post-operative care was provided in the COVID-19 ward,” a senior doctor said.

Two more surgeries were performed. “But the baby had complications due to the anomaly and bacterial infection,” he said. The baby died on July 7 due to septicaemia, Hirschsprung’s disease, multiple laparotomies, COVID-19 and cardiac arrest, according to a bulletin issued by the Health Department.

A 39-year-old man from Chennai was admitted to a private hospital with complaints of fever for four days, sore throat and loss of smell. He died on the same day owing to COVID-19 pneumonia and acute respiratory distress syndrome. A 59-year-old man, who tested positive for COVID-19 on June 28 and who was under home isolation, was declared brought dead at a private hospital on July 8. He had diabetes and systemic hypertension and was taken to the hospital owing to sudden unresponsiveness.

Over 70% of the fresh cases were from the rest of the State. Tiruvallur led the daily count with 364 cases. Virudhunagar and Madurai followed with 289 and 261 cases respectively. Kallakurichi witnessed a spike in cases, with 231 persons testing positive.

(*This is inclusive of two deaths cross-notified to other States and one patient who died after testing negative for the infection.)

Serial rapist, who posed as a policeman, arrested in Chennai

Encroachments make a comeback in some water bodies despite repeated evictions