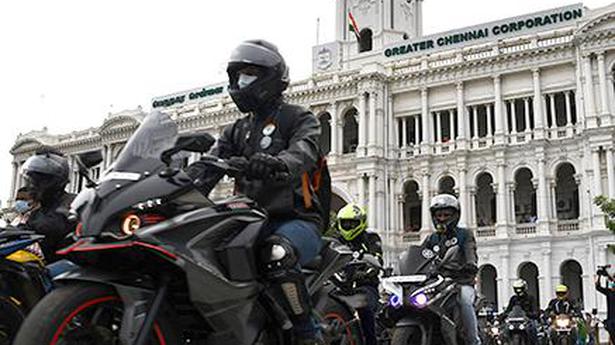 The Greater Chennai Corporation has conducted 5 lakh RT-PCR tests for COVID-19, making the city the first in the country to achieve the feat.

Launching a motorcycle rally to create awareness of the disease from Ripon Buildings on Saturday, Corporation Commissioner G. Prakash said the State government had spent ₹200 crore on testing residents in the city’s 15 zones. A total of ₹400 crore had so far been spent on containment measures. “Our aim is to reduce the positivity rate to 5% this month. The positivity rate has come down from 37% to 12%. Before the lockdown, 1,400 people out of 4,000 tested positive. Now, it is 1,200 out of 13,000,” he said. The number of residents being tested has touched 13,000 per day.

Stressing the need for immediate care after a positive test, he said the Corporation had taken steps to reduce patient turnaround time from 6 hours to 3 hours, asking sanitary inspectors to take them for further examination immediately after the test data was received.

“We have developed a portal to facilitate screening of patients before making a decision on home isolation, tertiary care or care centres. Over 350 doctors are at work to screen patients,” he said.

Zones like Royapuram, once a hotspot, have registered a case doubling time of three-and-a-half months. The city’s case doubling time was 47 days, as against 21 days for the country, he said. As many as 20,000 beds had been readied in the city.

“As many as 5 lakh residents who tested positive have been released from quarantine. A total of 8.5 lakh people have so far been quarantined. Over 11 lakh have participated in 18,000 fever camps and 60,000 have tested positive. Over 80% of the patients have been treated,” he said.