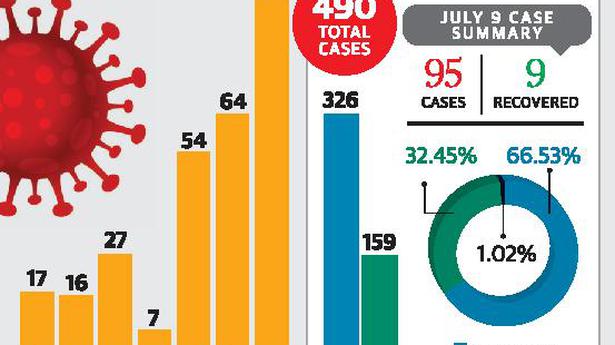 The coastal areas of Thiruvananthapuram continued to witness alarming levels of SARS-CoV-2 local transmission as the district scaled new peaks in COVID-19 by reporting 95 cases, of which 92 resulted from contact transmission.

Worryingly, the Poonthura region alone, which comprises the Poonthura ward and adjacent areas, accounted for 88 cases. Highlighting the dire situation during his customary briefing on Thursday, Chief Minister Pinarayi Vijayan pointed out that the cluster that necessitated triple lockdown in the entire city was the result of a fish merchant in the region contracting the disease after travelling to Kanyakumari.

While 21 people are learnt to have contracted the infection from the person, the cluster has grown close to 200. While 77 Poonthura natives, including several children, some aged less than 5 years, are among the infected, a few others from nearby places, including Vallakadavu, Manacaud and Valiyathura, have also tested positive for SARS-CoV-2. The patients include fish vendors and auto drivers who frequent other parts of the city.

A 45-year-old Panavoor-native civil police officer attached to the Pettah police station has also tested positive. Involved in the Janamaithri community policing scheme, the officer is known to have come in close proximity with an Armed Reserve Camp officer who tested positive last week. As many as 12 officers in the station are in quarantine. A 31-year-old Pattom native, who is known to have visited the Vikram Sarabhai Space Centre, which has remained shut since July 3, has also been diagnosed with the disease.

Three employees, including a housekeeping staff member and a canteen worker, of KIMS Hospital and a year-and-a-half-old daughter of one of them also tested positive for the disease. A 63-year-old cancer patient, hailing from Pattom, has also contracted the infection. His is one of the six cases in which the source of infection is unknown.