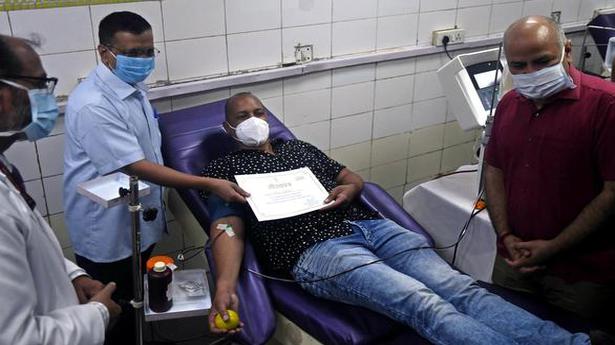 Chief Minister Arvind Kejriwal on Wednesday said the capital was in a much better position regarding COVID-19 than had been estimated amid rising cases in June, but asserted that there was no room for complacency.

Both active cases and deaths had reduced in the city due to the ‘Delhi Model,’ also been praised by Prime Minister Narendra Modi, he said.

“Precisely 1.5 months ago, around June 1, we had estimated on the basis of a formula created by the Centre that there would be 2.25 lakh cases, but these are actually half of that; there are 1.15 lakh cases,” Mr. Kejriwal said.

“The Delhi government on its own would have failed at this; we went to all stakeholders from the Centre to banquet hall owners in the city for help. All this has been achieved by all of us and especially (the) 2 crore Delhiites,” he said, while thanking all those engaged on the frontline in combating the pandemic.

The ‘Delhi Model’ praised by the PM, he said, had several factors such as teamwork between the Centre and the Delhi government, zeroing in on systemic deficiencies to rectify them and undertaking steps such as making home isolation a “better experience.”

Even today, people in many States were not getting tested, because of issues related to quarantine centres. As a result, the infection was spreading, but this was not allowed to happen in Delhi, he said.

“We are in a much better state compared to earlier but we cannot afford to get complacent; we must maintain social distancing; our safety is in our own hands,” he added.