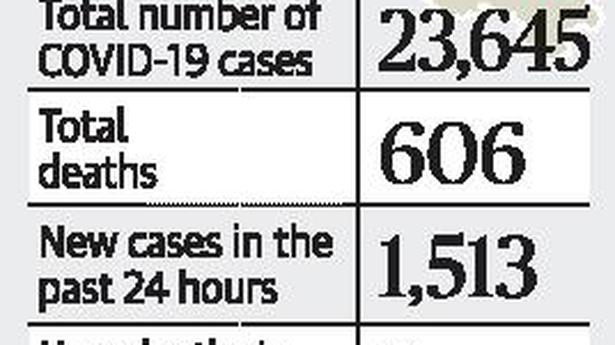 A total of 1,513 new COVID-19 cases were reported in Delhi in the past 24 hours, taking the total to 23,645, according to a health bulletin released by the Delhi government on Wednesday.

This is the biggest single-day jump in the number of cases in the city so far, and also the first time when over 1,500 cases were reported in 24 hours. Six of the last seven days, including Wednesday, have recorded more than 1,000 cases, while one day recorded 990 cases.

Also, 50 more deaths have been reported, taking the total to 606.

But only nine of these deaths were declared in the past 24 hours.

The number of patients on ventilator was 42 on Monday, as per the bulletin. On Tuesday, the Delhi government stopped giving this particular data.

But according to new data provided in the bulletin, 255 ventilators in dedicated COVID-19 hospitals were “occupied”.

The Delhi government spokesperson did not respond to multiple calls and messages seeking clarity on the steep jump.

The Delhi government has formed a five-member committee to guide the government on overall COVID-19 preparedness of hospitals, and augmentation of health infrastructure, according to an official order.

The committee has been asked to submit a report by June 6.

Meanwhile, Chief Secretary Vijay Dev ordered that it is the duty of the District Magistrates and DCPs to ensure compliance of “directions for better management of bodies of COVID positive/ suspect persons”. Timely disposal of the bodies is the responsibility of the heads of hospitals, as per a government order on the matter.