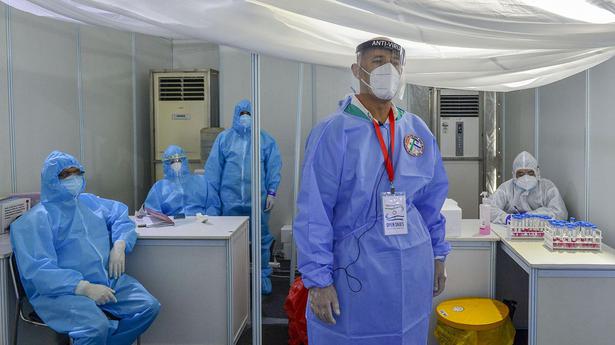 The government has pulled all stops to help Israel conduct COVID-19 research on patients admitted to four Delhi hospitals, including transfer of saliva samples and patients’ data to Israel, The Hindu has learnt.

The trial obtained “expedited approval” by the Health Ministry’s Screening Committee (HSMC) chaired by Dr. Balram Bhargava of the Indian Council of Medical Research (ICMR) on July 28, a day after the Israeli team had arrived in India. The decision is yet to be endorsed by the full committee that is expected to meet in August.

Though the ICMR is the apex body for biomedical research and foreign-aided research in the country, the current trials will be controlled by the DRDO.

The DRDO proposes to transfer 5,000 saliva samples to the Israeli defence team.

The DRDO was forced to seek the approval of HSMC after the institutional ethics committees of two hospitals — Lady Hardinge Medical College and Hospital and Ram Manohar Lohia Hospital — where the patient samples are being collected, suggested that a final approval be obtained from the HMSC as the process involved “foreign collaboration.”

The other two hospitals where the Israeli team will be conducting trials are Sir Gangaram Hospital and Lok Nayak Jaiprakash Hospital (LNJP).

However, Principal Scientific Advisor K. VijayRaghavan had written to DRDO Chairman Dr. Satheesh Reddy on July 27 that scientific departments of the government do not require to go to the HMSC.

Mr. VijayRaghavan stressed that COVID-19 research can be carried out in consonance with the guidelines issued by a vaccine task force constituted by the Prime Minister’s Office (PMO) which enables the DRDO to take decisions on testing and sample sharing. He said the DRDO had the authority to decide the mechanism of conducting the experiments and what part of samples could be exported for collaborative research.

Mr. VijayRaghavan said it was a “research validation” study for which RT-PCR tests may have to be done on the participants and the positive results may be communicated to the ICMR in a way that does not impact the speed of the research programme.

While approving the trial on June 28, the ICMR chief expressed caution on handling of the saliva samples of COVID-19 patients as it may contain live virus and said as per 1997 guidelines for exchange of samples for biomedical research purposes, it was essential for information to be available in a central location — the ICMR headquarters.

The Delhi Government has also waived the mandatory seven-day quarantine period for the 35-member the Israeli team.

In a statement issued on Friday, the Israeli Embassy said the trials are being conducted on a large sample of patients in India and if the results validate the effectiveness of the tests, they would be mass manufactured in India and marketed to the world by Israel and India jointly.

The statement said the trial of four different kinds of technologies that have the potential to detect coronavirus in as less as 30 seconds have started.

As reported by The Hindu, Prime Minister Narendra Modi and his Israeli counterpart Benjamin Netanyahu have held three telephonic conversations since the outbreak of the pandemic to discuss mutual assistance in dealing with the virus.