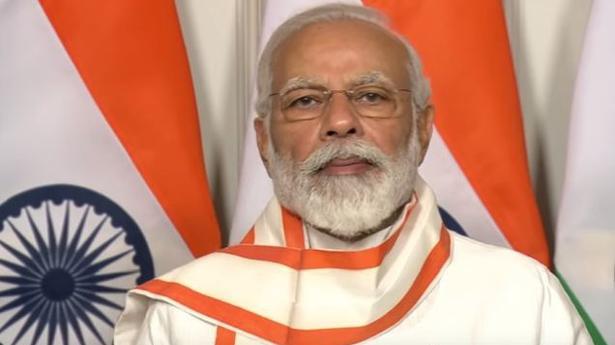 As India pledged $15 million to Gavi, the international vaccine alliance, on Thursday, Prime Minister Narendra Modi said the country stood with the world in these challenging times. He was addressing the virtual Global Vaccine Summit hosted by British Prime Minister Boris Johnson.

Addressing heads of state, Ministers, business leaders, U.N. agencies and civil society of over 50 countries, Mr. Modi said: “India’s civilisation teaches to see the world as one family and that during this pandemic it had tried to live up to this teaching,” a government statement read.

He said India had shared its stocks of medicines with over 120 countries, set up a common response strategy in its immediate neighbourhood and provided specific help to countries in need while protecting its own population, the statement said.

“The Prime Minister said the COVID-19 pandemic, in some ways, has exposed the limitations of global cooperation and that for the first time in recent history, the human kind faces a clear common enemy.”

He said Gavi was not just a global alliance but also a symbol of international solidarity. He said India understood the importance of immunisation since it has a huge population and limited health facilities.

The country had added six vaccines to its National Immunisation Programme to expand protection, he said. The vaccine supply chain had been digitised and an electronic intelligence network had been developed to monitor the integrity of the cold chain, he said.

“The Prime Minister said India is also the world’s foremost producer of vaccines and that it is fortunate to contribute to the immunisation of about 60% of the world’s children. Mr. Modi said India recognises and values the work of Gavi…,” the statement said.