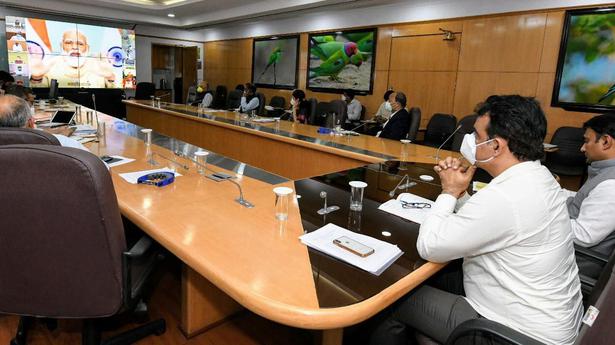 The Karnataka government on Tuesday appealed to the Centre to make one year of government service mandatory for fresh medical graduates and postgraduates so that their services can be utilised in fighting COVID-19.

This appeal was made by Medical Education Minister K. Sudhakar during a videoconference with Prime Minister Narendra Modi who reviewed the COVID-19 situation in 10 most-affected States, including Karnataka.

Dr. Sudhakar represented Chief Minister B.S. Yediyurappa, who is undergoing home isolation after receiving treatment for COVID-19, along with Deputy Chief Minister C.N. Ashwath Narayan. He sought doubling of medical seats and Centre’s assistance in setting up liquid oxygen units in the State.

The Medical Education Minister also appealed to the Prime Minister to initiate measures for immediate commencement of final year medical and paramedical courses so that students could be used in COVID-19 services in areas outside of the designated hospitals.

Dr. Sudhakar also talked about shortage of liquid oxygen units due to high demand and sought the Centre’s assistance in setting up these units in the State.

He said that testing facilities had been ramped up from the earlier 20,000 per day to nearly 50,000 now. It has been planned to further increase it to 75,000 a day, he explained.

The Prime Minister suggested to the States work towards reducing mortality rate with respect to COVID-19 from the present 1.99% to below 1%.

Pointing out that 80% of the country’s active cases are from the 10 States, including Karnataka, the Prime Minister told the representatives of these States that efficient combating measures would play a key role in the country’s efforts to prevent the spread of the pandemic.

He also asked the authorities concerned to trace the primary and secondary contacts of infected people within 72 hours of them testing positive.

Dancing in memory of a singing legend