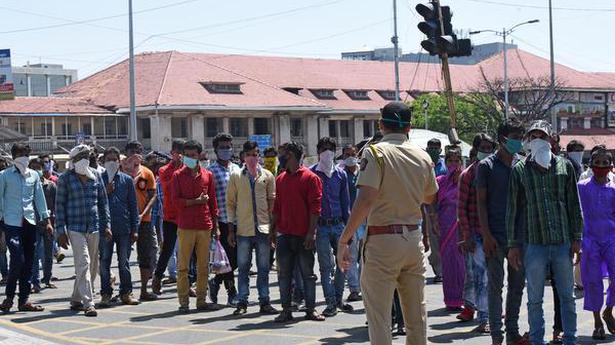 In the 68 days since the nationwide lockdown was imposed to combat the COVID-19 pandemic, the Union Home Ministry on an average issued 1.3 orders per day.

As on Sunday, as many as 94 orders, guidelines, addenda and letters have been issued by the MHA to the States pertaining to the lockdown.

Under the DM Act, the States and district authorities can frame their own rules on the basis of broad guidelines issued by the MHA.

On Saturday, MHA issued another set of guidelines lifting most of the restrictions imposed since March 24 and restricted strict implementation of lockdown measures till June 30 to containment zones where multiple cases have been reported.

The lockdown first imposed on March 24 was extended four times. The fifth phase has been rechristened as Unlock 1.0 to open up economic activities even as more than 1.75 lakh cases and around 4,900 deaths were reported till Sunday.

MHA had also started three control rooms to monitor the complaints received from States and to resolve the migrant crisis. As all modes of public transport were suspended, thousands of migrants have been walking back several hundred kilometres to reach home.

A senior Home Ministry official said the helplines in the control room were getting around 600 calls daily in the initial days but gradually the number had come down. After over 50 days into the extended lockdown, the Railways started running Shramik Special trains for the migrant workers.

Meanwhile the Central Armed Police Force (CAPF) are yet to receive orders from the MHA on what comprises ‘swadeshi’ or indigenous products. On May 13, Union Home Minister Amit Shah had announced that CAPF canteens will only sell ‘swadeshi’ goods from June 1.

A senior government official said the Ministry of Commerce was yet to issue the guidelines defining the swadeshi products even though the scheme is to be implemented form June 1.

The canteens sells many daily-use products at a subsidized rate to around 10 lakh personnel, their families and retired personnel.