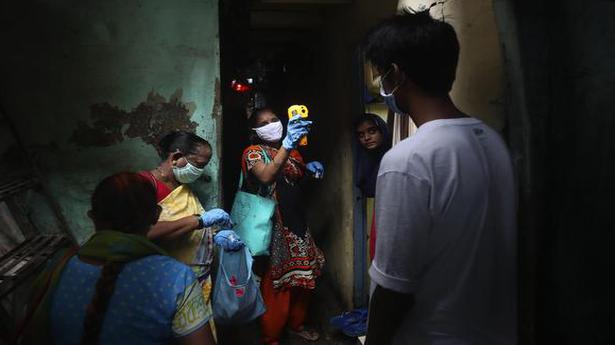 On July 1, the State had reported 5,537 cases. Since then, the State has been bedevilled by four consecutive spikes of 6,000-plus cases a day, which climaxed on Saturday when Maharashtra reported 7,047 cases — its highest single-day surge till date.

Of the total case tally, 87,681 are active ones, said State Health Department officials.

As many as 3,522 patients were discharged on Monday, taking the total number of recoveries till date to 1,15,262.

The city’s death toll has risen to 4,938 with 39 new deaths reported today.

Besides Mumbai, significant fatality surges were reported from the Mumbai Metropolitan Region (MMR), with Navi Mumbai reporting 28 deaths to take its cumulative death toll to 243, Thane reporting 16 to take its total death toll to 579, and Vasai-Virar recording 13 fatalities as its death count rose to 123.

Seventeen deaths were reported from Pune district as its death toll surged to 889.

After Mumbai, Pune district reported another massive spike of more than 804 new cases as its total case tally soared to 29,403.

Of these, 14,106 are active cases as given by the State health Department even though district administration authorities said only 11,199 cases were active.

Along with Mumbai and Pune, big surges were reported across the MMR.

Meanwhile, Jalgaon and Nashik districts — both virus hotbeds in north Maharashtra — saw massive spikes of 237 and 262 new cases respectively. Nashik’s total case tally stands at 5,478 of whom 2,077 were active while Jalgaon’s stood at 4,473 with 1,673 active cases.

Aurangabad district, a virus hotspot in the Marathwada region, saw a rise of 244 new cases to take its total case tally to 6,812 of whom 3,505 are active cases. With 11 fatalities reported today, the district’s total death toll has reached 301.

He further informed that presently, 6,15,265 persons across the State were in home quarantine and 46,355 were in institutional quarantine facilities.