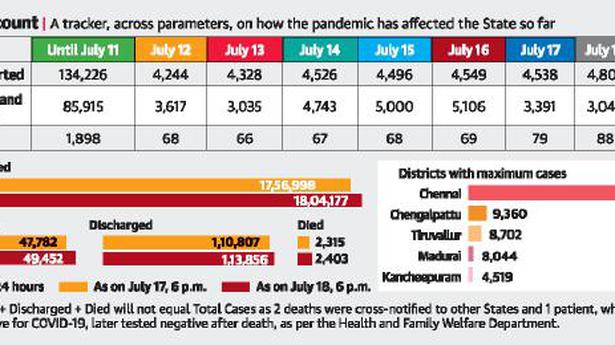 It was yet another high for Tamil Nadu as it reported 4,807 new cases of COVID-19 and 88 deaths on Saturday. The fatalities included 46 persons who died on July 17 alone.

Of the fresh cases, Chennai accounted for 1,219 infections, while neighbouring districts of Tiruvallur and Chengalpattu had over 300 cases each.

The new infections took the State’s tally to 1,65,714*. Of this, 49,452 persons are under treatment, while the total number of persons discharged after treatment climbed to 1,13,856, with 3,049 more persons walking out of hospitals across the State.

The number of deaths reported in the Health Department’s daily bulletin takes into account deaths that have occurred over three or four days. Of the 88 deaths (64 in government and 24 in private hospitals) reported on Saturday, 18 persons died on July 16, 46 on July 17 and 12 on Saturday.

As per Friday’s bulletin, a total of 54 persons died on July 16. This took the total number of fatalities on July 16 to 72. The death of two persons that had occurred during the first week of the month in Madurai were also recorded in today’s bulletin.

Chennai accounted for 31 deaths, while nine occurred in Madurai. Seven persons died in Tiruvallur and five in Kancheepuram. There were four deaths each in Ramanathapuram, Theni and Vellore districts.

A 29-year-old woman with systemic hypertension was admitted to the Mohan Kumaramangalam Government Medical College Hospital, Salem, on July 15. She died on July 17 due to respiratory failure, COVID-19 pneumonia and postpartum cortical venous thrombosis.

A 31-year-old man from Chennai was admitted to a private hospital with complaints of fever, loose stools and breathing difficulty. He had no co-morbidities. He died on July 17 due to acute respiratory failure and COVID-19.

Three persons were declared brought dead. This included a 57-year-old woman and a 58-year-old woman who were brought to the Government Kilpauk Medical College Hospital. Their samples returned positive for COVID-19.

Chennai, along with seven northern districts, reported 50% of the new cases. Tiruvallur saw 370 cases, while Chengalpattu reported 323. The number of new cases in other northern districts were: Vellore 191, Ranipet 109, Kancheepuram 97, Villupuram 95, and Kallakurichi 77.

The surge in cases continued in Thanjavur, with 181 persons testing positive. Tiruchi reported 124 cases, while Coimbatore had 118. With the new cases, Madurai’s tally surpassed the 8,000-mark.

Apart from this, 76 persons who returned from abroad and other States tested positive for the infection in the State. This included 26 persons from Karnataka.

Presently, there are 56 testing facilities in the government sector and 55 in private.