Home Cities Bengaluru Coronavirus | Over 50% of 918 cases from Bengaluru 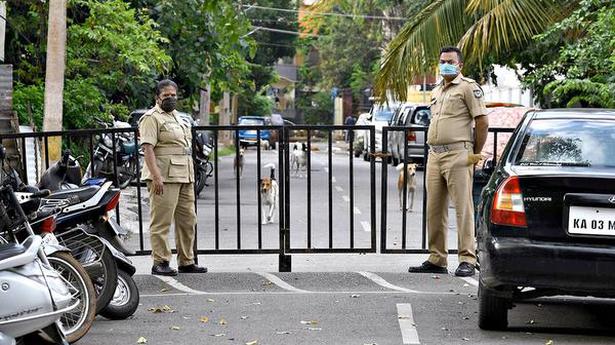 Karnataka saw a huge spike in the number of COVID-19 positive cases, with 918 cases on a single day on Saturday. Over 50% of these cases have been reported from Bengaluru Urban alone, with 596 people testing positive.

The total number of cases in the State has now touched 11,923. Of these, 7,287 patients have been discharged.

On Saturday, Karnataka recorded 11 deaths taking the toll to 191. This is apart from four non-COVID-19 deaths. While three deaths each have been reported from Bengaluru Urban, two were from Bidar and Kalaburagi. Gadag and Dharwad reported one each.

The number of critical and high-risk patients is also on a steady rise since June 14. From 16 ICU admissions on June 14, the number jumped to 197 on Saturday.

C.N. Manjunath, director of Sri Jayadeva Institute of Cardiovascular Sciences, who is also the nodal officer for labs and testing in the State’s COVID-19 task force, said the increasing number of cases only indicated that community transmission had begun. “This is the beginning of the peak and there is a possibility of the number of cases further going up from now. People should strictly follow precautions and maintain social distancing,” he said.

Pointing out that the spread is happening at work places apart from clusters and certain thickly populated wards in the city, Dr. Manjunath said several premier healthcare institutions, including Kidwai Hospital, NIMHANS and Victoria Hospital, had been hit. In Jayadeva institute, 16 staffers, including three doctors, had tested positive so far, he said.

Only 45% of elevated corridor in Koramangala completed