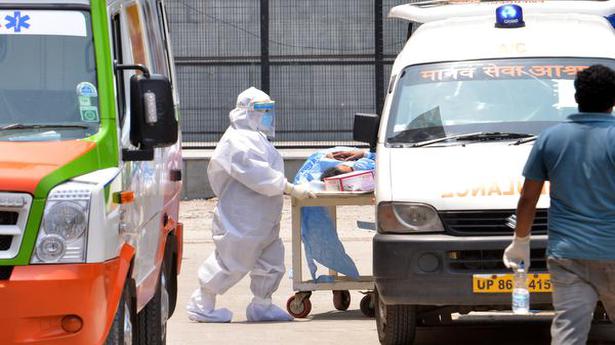 The family of a 68-year-old coronavirus positive man has alleged that around five city hospitals denied him treatment on Thursday morning, including Delhi government-run Lok Nayak Jai Prakash Narayan (LNJP) Hospital, where he eventually passed away.

“My dad is having (sic) high fever. We need to shift him to hospital. I am standing outside LNJP Delhi & they are not taking him in. He is having (sic) corona, high fever and breathing problem. He won’t survive without help. Pls help,” Amarpreet, the deceased’s daughter, posted on Twitter on Thursday morning.

“We refute the allegations made by the family. We never refuse treatment for any patient,” the hospital spokesperson said.

According to family members, the deceased had fever and they tested him at Sir Ganga Ram Hospital, a private hospital in the city, about five days ago. “The next day we checked out a link online and found out that he was positive, but the hospital didn’t inform us. No officials came to the house where he was staying to put him on home quarantine and no sticker was pasted outside the house that he was on quarantine. We decided to home quarantine him ourselves,” Mandeep Singh, the deceased’s 44-year-old son-in-law, said.

He added that the family kept trying to admit him in different hospitals, but they responded saying beds were not available. “Hospitals told us to not even bring the patient to the hospital as we won’t be allowed inside the gates,” he said.

“This morning, he had breathlessness and we contacted around four hospitals, but they said beds were full and denied to admit him. Then we called the government helpline number, 1031, and they asked us to take him to LNJP Hospital. His son took him to the hospital in his car. He went inside, leaving his father outside, but the hospital denied admission as he was tested in Sir Ganga Ram Hospital. When he came back to car, his father’s condition had worsened and he put him on a stretcher and rushed him inside the hospital. But he died soon as they gave him oxygen,” Mr. Singh said.

It was not immediately known which other hospitals had ‘denied’ the man entry. The Delhi government has not responded to the incident yet.

Sir Ganga Ram Hospital spokesperson said that the family should have contacted the hospital as soon as they found out that the patient was positive.

“I do not know the particulars of the case, but out of 135 COVID-19 beds, 133 were full for the past couple of days. The rest two beds are kept for any emergency, as there are a lot of healthcare workers and employees working at the hospital,” the spokesperson said.

“All positive reports are sent to the Integrated Disease Surveillance Programme (IDSP), who reach out to the family for counselling and quarantine. This is done for all positive cases the same day itself,” the spokesperson added.