Home Cities Delhi Coronavirus | Some families do not tell us if the deceased was... 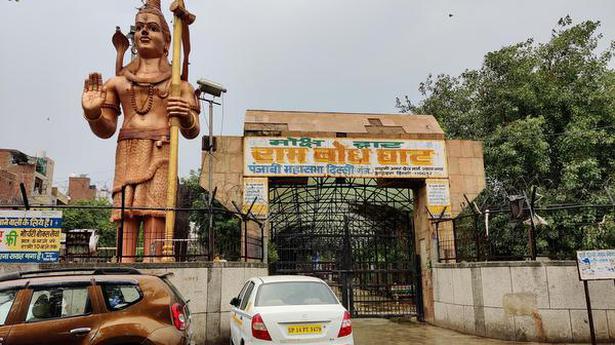 Priests at non-COVID-19 cremation grounds feel scared and vulnerable because they are unsure whether the bodies of people being cremated had tested positive for COVID-19 or not, said the priest to whom The Hindu spoke.

At Ram Bodh Ghat cremation ground in Shahdara’s Jwala Nagar, five bodies were on the pyre on Saturday afternoon while the family of one waited along with others.

The head priest, Vinod Sharma (53), said that the number of bodies coming in for cremation have increased in the past few weeks. “Usually, we get only four-five bodies on a daily basis but now we are getting 12 to 15 — almost thrice the number — every day,” he said.

The priest said that he and the staff at the ground are often “misguided” by the deceased’s family due to which they feel they are at “high risk”. “Whenever people come with bodies for cremation, we ask them the cause of death of the person. There have been instances when people have not shared that the person could have had COVID-19,” he said.

Sharing an instance from four days ago, Mr. Sharma’s son Sunny, who also manages the cremation ground, said that a family had come to cremate a man whose body had arrived from a private hospital in east Delhi and Mr. Sharma had asked them if the person had any COVID-19-related problems. “They denied and on Friday, they informed us that his test was conducted at the hospital and his reports were positive. The family said they were not aware,” Mr. Sunny said, adding that he is not sure if the family was lying about being unaware.

A priest of Geeta Colony cremation ground, who did not wish to be named, had similar concerns. “These days, people are not able to get tests done and they eventually die. We do not know if the person who has died was infected with the virus [COVID-19]. If the person had symptoms before dying, and were not tested, then it puts many lives at risk,” the 49-year-old said.

Mr. Vinod said that the as more bodies have started arriving in the past few weeks, they are finding it tough to manage. Sharing an incident from Saturday morning, he said that a family had come for the cremation of a person and they were told to wait for an hour and a half as five bodies had arrived at the same time. “They lost their cool which led to a fight and the police had to be called. We all reached a compromise later,” he said.

The priests shared their concerns over the issue of sanitisation of non-COVID-19 cremation grounds. While some priests said they were sanitising their area, others said that they expected civic bodies to take the responsibility. Mr. Sharma claimed that Ram Bodh Ghat cremation ground was not being sanitised by the civic body. “We are at a high risk. Four of our staff members, including two priests, have developed COVID-19 symptoms and they are quarantined,” he said.

‘Red Light On, Gaadi Off’: Civil defence volunteers to be deployed at traffic intersections in Delhi | Delhi News – Times of India