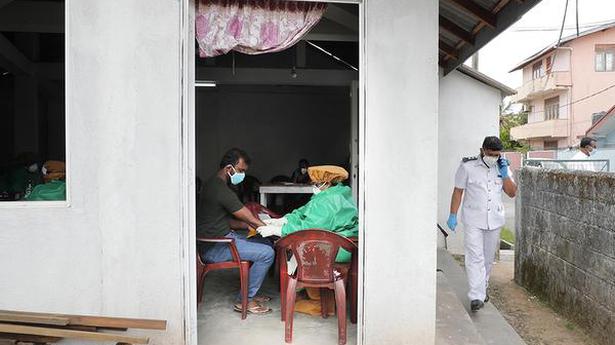 Less than a month before Sri Lanka’s scheduled general election, the island nation has witnessed a sudden spike in coronavirus cases, with health authorities reporting 283 new patients on Friday and flagging the “risk of community transmission”.

According to officials, the latest detection of COVID-19 cases locally — totalling 339 since Thursday — emerged from a drug rehabilitation centre in Kandakadu in Polonnaruwa district, located in Sri Lanka’s in North Central Province.

“We are still investigating where the source of this infection is, but meanwhile, we are carrying out elaborate contact tracing and testing at the rehabilitation centre,” chief epidemiologist Dr. Sudath Samaraweera told The Hindu. Asked if the recent cases pointed to possible community transmission, he said: “At the moment, there is no community transmission, but the risk is there.”

In a statement, Army Commander Lt. Gen. Shavendra Silva, who heads the National Operation Centre for Prevention of COVID-19 Outbreak, said President Gotabaya Rajapaksa and Prime Minister Mahinda Rajapaksa had instructed them “to take all possible steps” to prevent any community transmission.

From the time Sri Lanka detected its first local case on March 10, health authorities and the Army directed hundreds to quarantine centres, based on their travel history, exposure to patients and symptoms. One person who had been quarantined, said to be a drug addict, and had tested negative before he was shifted from the quarantine centre to the rehabilitation centre, health officials said. When he was tested again, after he was recently brought to the Welikada Prison in the capital Colombo, he was positive, prompting authorities conduct more tests at the drug rehabilitation centre he left, they added.

The recent spate of infections constitutes the second live cluster in the country, apart from the ‘Navy cluster’, in which over 800 have recovered. For the past few weeks, most of the new cases were reported among Sri Lankans who returned from other countries and tested positive on arrival, and fewer locally. On Friday, 10 such new cases were reported, nine of whom arrived from India, according to local media.

Gearing up for polls

As of Friday evening, Sri Lanka has reported 2,447 cases, 1,980 recoveries and 11 deaths. The figures — relatively low in the region — drew international attention, and praise for the country’s strong public health sector. However, the recent spike in cases comes even as the 21 million-strong island nation prepares to go for polls in less than a month.

Fire breaks out in COVID hospital near Cuttack