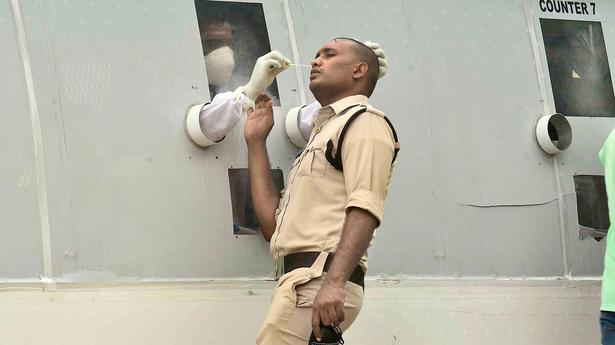 A massive surge in local transmission of COVID-19 in coastal Thiruvananthapuram resulted in Kerala recording its highest single day spike yet of 608 cases on Tuesday. The State’s cumulative case burden fell just short of the 9,000 mark.

Chief Minister, Pinarayi Vijayan, said the public had to come to terms with the reality that the COVID-19 situation was set to escalate. The State had to prepare itself for the long haul and the epidemic was not expected to ease before year end.

Kerala’s 608 new cases raised cumulative cases to 8,930. Imported cases were 198, while those reported from the community from local transmission accounted for more than double the number, at 409.

Mr.Vijayan said that in 26 “contact cases”, an epidemiological link was yet to be established.

A 47-year-old man died at Alapuzha taking Kerala’s COVID death toll to 34. With 151 recoveries on Tuesday, active cases were 4,454.

Thiruvananthapuram district accounted for 201 of the 608 new cases, of which 158 were due to local transmission, including 19 with no known source of infection. The district also had the highest case burden with 794 active cases.

As public health experts pointed out, the Poonthura cluster in Thiruvananthapuram turned out to be the tip of the iceberg and at least 200-plus kilometres of the coastal belt was now seen as one single transmission hub.

The 43 new deaths were in nine districts. Anantapur reported 10 deaths, followed by West Godavari with nine. Chittoor, East Godavari and Kadapa reported five deaths each, while Kurnool and Prakasam districts had three each. Visakhapatnam reported two and Vizianagaram reported one death.

Karnataka on Tuesday saw 87 deaths, the highest on a single day so far. With this, the toll touched 842.

With 2,496 new cases, the total for positive cases touched 44,077. Bengaluru Urban recorded 1,267 cases and 56 deaths. After seeing a decline in the number of tests in the past two days, as many as 23,674 tests were conducted on Tuesday.

(With inputs from Vijayawada and Bengaluru bureaus)

Roger Federer sings Beatles classic for commercial | Off the field...