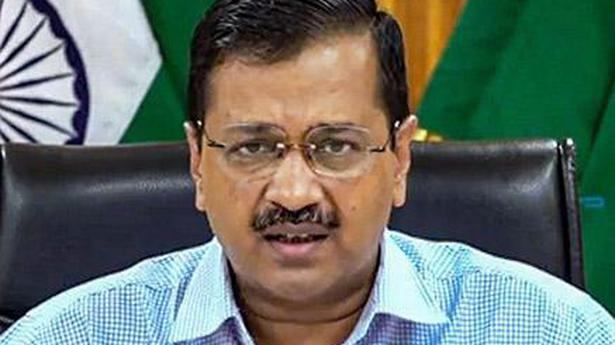 Chief Minister Arvind Kejriwal on Monday said numbers related to COVID-19 cases in the Capital over the last week seemed to indicate that things were improving.

The Delhi government would provide pulse oximeters to patients recovering under home isolation. He said that every district will have oxygen concentrators in addition to a helpline and a team would visit the homes of recovering patients. Delhi has 25,000 active COVID-19 cases and around 12,000 people under home isolation, he said.

Addressing a digital briefing here, Mr. Kejriwal said that the country was fighting two wars against China, one at the border and another against the virus from China, even as he asserted that people should not retreat in their fight against the virus, just as India’s 20 brave soldiers did not back down on the border.

“A week ago, there were 24,000 active cases in Delhi, which means that in one week, there has been a surge of only 1,000 cases and the number of recovering people is the same as the number of people who are getting infected. This gives us hope that things are slowly stabilising,” he also said.

In the last few days, he said, the Delhi government had increased testing up to three times. Earlier, around 5,000 tests were conducted per day which had now increased to 18,000 tests per day, he said.

“Some labs were involved in unacceptable activities, we have taken action against them. Now, all the labs have been directed to work on their full capacity and to work on a fair basis,” he said.

With the help of the Central government, he said, “Antigen tests, which give results in around 15 minutes, have begun in Delhi. “All the people with very mild symptoms or who are asymptomatic are treated at their homes. Our team assists them with daily calls and advises them on what to do on a daily basis,” he said.

“The only issue with COVID-19 is that the patient may experience a shortage of breath and their oxygen level may fall. In such a case, lives will be saved if the patients are given oxygen support in time. The Delhi government will provide oxy-pulse meter to all the patients who are recovering under home isolation. The patients can use them in their period of recovery and can return it to the government after they have fully recovered,” he also said.He said that the people and all political parties must stand united against China.